Fourth of July 2021 Fireworks Live Streaming: Here’s Where to See or Live Stream 4th of July Firework Celebrations Across The United States

Even if you are unable to congregate at a large venue, you can still have a great holiday with backyard barbecues and later see the sky illuminated with spectacular fireworks and behold a stunning view. From your home or from a navy pier, Here are perfect places to see fireworks. 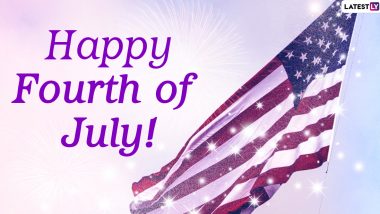 Fourth of July (4th of July) - also known as Independence Day in the United States - is almost here and historically celebrations dictate that it’s time to get your barbeques in gear and procure some fireworks to light up the sky with a spectacular display. Independence  Day in the United States is a grander affair, where families and friends come together in celebration of the day when their forefather sent the colonisers back on their way. However, this year Independence Day might be a bit different considering the pandemic that raged through the country. Unlike last year, this year celebrations are not widely cancelled on account of the Covid-19. While some states have chosen to adhere to last years protocols and curbed outdoor activities, other states have decided to get back to normal. If you belong to the former category, there’s no need o despair. Even if you are unable to congregate at a large venue, you can still have a great holiday with backyard barbecues and later see the sky illuminated with spectacular fireworks and behold a stunning view. From your home or from a  navy pier, Here are perfect places to see fireworks or enjoy live stream from your home.

The fireworks at Empire State Building is what age-old traditions are made of. The annual Macy's 4th of July Fireworks is the most grandiose event and this year to avoid large crowds swarming the area, it will be televised on NBC and can be witnessed online on YouTube live stream.

If you can't make your way to the capital this year and it's been widely advised to refrain from doing so, you can watch the fireworks show at Washington D.C will be broadcasted on PBS on Saturday, July 4.

What better way to watch the fireworks than in the happiest place on earth. Spend your Independence Day by watching fireworks illuminate the Cinderella Castle in Disneyland Florida.

Life seems to be getting back to normal in many states. July 4th celebrations are expected to be carried out again this year after a long hiatus due to the pandemic in Chicago Navy Pier.

This year Fourth of July fireworks will be displayed at Philadelphia Art Museum. There's also going to be a  musical performance to delight the audience this year.

Summer and Fourth of July Fireworks have e long had a symbiotic relationship. The setting off of fireworks signals the beginning of a season filled with barbeques and beer with family and friends. So celebrate this Fourth of July with a spectacular firework show and have great summer folks.

(The above story first appeared on LatestLY on Jul 04, 2021 06:56 PM IST. For more news and updates on politics, world, sports, entertainment and lifestyle, log on to our website latestly.com).