Fourth of July Fireworks Over The Years! From Macy's to Lake Havasu Splendid Display of Lights, 5 Fireworks Videos From Previous Years 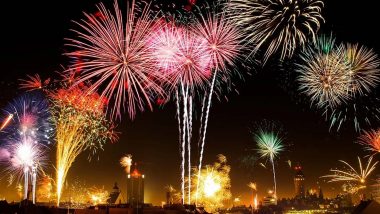 Independence Day in the United States is a federal holiday commemorating the Declaration of Independence of the country. It is observed on July 4 every year commemorating the event in 1776 when the Continental Congress declared the thirteen American colonies were no longer subject to Britain rule. And over the years, fireworks have become a part of July 4 celebrations in the US. Varying colours spark in the night sky making it look beyond beautiful. While every year July 4 calls for a lot of celebrations, this year festivities have been cancelled due to COVID-19. How to Celebrate 4th of July 2020 During COVID-19? From Virtual Party at Home to Celebrating With Neighbours From Distance, Ways in Which You Can Observe US Independence Day.

Disney's 2018 Fourth of July Fireworks at The Magic Kingdom:

Disney celebrated Independence Day at the Magic Kingdom with a beautiful firework show. The sky lit up in the colours of red, white, and blue.

The Fourth of July fireworks at Epcot theme park is a sight to behold. The theme park at Walt Disney World Resort attracts a lot of people to watch this sight.

New York City's fireworks are one of a kind. With live music, it looks like the colours are dancing to the tunes in the sky.

Fireworks over water are a different sight altogether. It simply elevates the look and feel of the surrounding.

(The above story first appeared on LatestLY on Jul 03, 2020 07:00 PM IST. For more news and updates on politics, world, sports, entertainment and lifestyle, log on to our website latestly.com).