Gandhi Jayanti 2020 Date And Significance: Know About the Day That Celebrates Birth Anniversary of Mahatma Gandhi, Father of the Nation 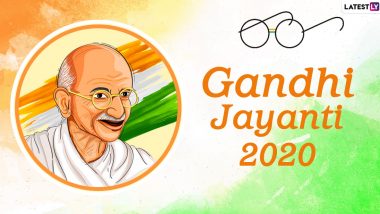 Gandhi Jayanti marks the birth anniversary of Mahatma Gandhi or Mohandas Karamchand Gandhi. Born on October 2 1869, he is known as the Father of the Nation for his efforts leading the Independent movement that drove the British forces out of the nation. Mahatma Gandhi is highly regarded for his following the principles of non-violence and peace throughout his life. Hence, United Nations Generally Assembly commemorates the day as International Day of Non-Violence since June 2007. Indians celebrate Gandhi Jayanti by remembering the works of the leader towards the country and his fight against social injustice. Independence Day 2020: Did You Know US Has Most Number of Gandhi Statues Outside India? Here Are 7 Memorials Dedicated to MK Gandhi Across Countries.

Gandhi was born in Gujarat's Porbandar district. He was a lawyer who inspired civil rights movements not only in India, but also in South Africa, where racial apartheid was prevalent. Showcasing his disinterest towards foreign clothes, Gandhi adopted Indian dhoti and a shawl in winter, woven on charka as identification of rural India.  Gandhi led Dandi Salt March in 1930 calling for the British to Quit India in 1942. He was imprisoned for many years, in both South Africa and India, however that didn't stop him from fighting for people's rights. Gandhi's life based on simple living and high thinking has inspired many to follow his footsteps. Mahatma Gandhi's Glasses Found in Bristol Auctioneer's Letterbox to Go on Sale in UK.

Gandhi Jayanti is marked by several prayer services and tributes all over India. Special events are held at Gandhi's memorial Raj Ghat in New Delhi where he was cremated. It is a national holiday and various events remembering the life of Gandhi is held.

Children dress up as Gandhi and speeches on Gandhi's contributions to independent India are held. Painting and essay competitions on Gandhi are also held in schools and colleges. Gandhi's favourite Bhajan, a Hindu devotional song, Raghupati Raghav Raja Ram, is usually sung in his memory at public places. Statues of Mahatma Gandhi at multiple places throughout the country are decorated with flowers and garlands. It is also a dry day in India wherein people refrain from drinking alcohol. Gandhi was assasinated on January 30, 1948 in New Delhi.

(The above story first appeared on LatestLY on Aug 15, 2020 02:43 PM IST. For more news and updates on politics, world, sports, entertainment and lifestyle, log on to our website latestly.com).