Kerala Piravi marks the birth of the southern state of Kerala. The state of Kerala was created on Nov 1, 1956, after India became independent. Before this, the region was 3 major provinces and several outlying regions under various rulers. Ahead of Kerala Piravi 2020, we bring to you significance, history and celebration related to the observance. 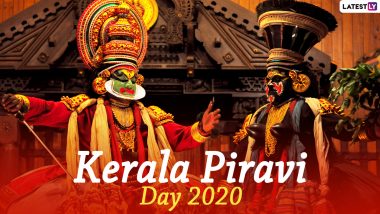 Kerala Piravi also known as Kerala Day marks the birth of the southern state of Kerala. The state of Kerala was created on November 1, 1956, after India became independent. Before this, the region was three major provinces and several outlying regions under various rulers. The regions then came to be known as Malabar, Cochin and Travancore. The observance commemorates this union that led to the formation of modern-day Kerala. Malayalees celebrate the observance with varying festivities every year. While this year, celebrations have been curtailed due to COVID-19 pandemic, virtual events will be held where people will participate in different activities highlighting the culture, traditions and customs of Malayalees. Ahead of Kerala Piravi 2020, we bring to you significance, history and celebration related to the observance. Kerala Piravi 2020 Poems And Wishes: WhatsApp Stickers, Malayalam Speeches, Facebook Greetings And GIFs And to Send on Kerala Day (Watch Videos)

In the name, Keralam, ‘Kera’ means coconut tree and ‘Alam’ means land, hence Keralam means the land of coconut trees. It is also said that Kerala originally got its name after the first ruler, Keralian, who rule these independent provinces in the early centuries. A popular movement called Aikya Kerala was held (united Kerala) for the formation of the state which gave an impetus to the reorganisation of the state on a linguistic basis. Kerala Piravi 2020 Virtual Celebrations: From Malayalam Speeches to Traditional Group Dance, 5 Ways to Observe Kerala Day.

Known as ‘the god’s own country,’ the origins of Kerala is linked to an Indian mythological story. According to the story, the land was formed by Parashurama, the sixth incarnation of Lord Mahavishnu. The story says Lord Parashurama threw his axe across the sea northwards from Kanyakumari to carve a land. The place where it landed is believed to have become Kerala. Kerala Piravi Speeches in Malayalam and English: Talks On Kerala's History, Customs, Traditions, Social Advancement and Progress (Watch Videos)

Every year, Kerala Piravi is observed by following conducting different events like reciting Malayalam poems, delivering speeches, traditional group dances and various other such events. Kerala is known for its beauty which attracts tourists from across countries. Kerala Day is a proud moment for Malayalees who come together and celebrate the observance.

(The above story first appeared on LatestLY on Oct 31, 2020 08:34 PM IST. For more news and updates on politics, world, sports, entertainment and lifestyle, log on to our website latestly.com).