Mahashivratri Lord Shiva Avatars: From Sadhojat to Ghoresh Top 7 Forms of Bholenath That You Should Know Of 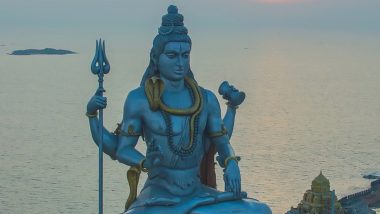 During the 20th Kalpa, Lord Brahma’s skin colour turned red. While he was meditating, he saw an entity taking birth at that time. The new-born, whose skin colour was red too, was later recognized to be an incarnation of Lord Shiva and was named Namdeva by Lord Brahma.

At the time of Shiva Kalpa, Lord Shiva took birth in another avatar. While Lord Brahma was meditating, a black smoke emerged his meditation, who was named Aghor by the former. It is believed that this Shiva’s avatar had infinite knowledge.

At the time of the 21st Kalpa, i.e., Peetavasa, Lord Brahma only wore the apparel of yellow colour. It was during the time of Lord Brahma’s meditation, an entity with alluring beauty took birth, which was named Tat Purusha. This incarnation of Lord Shiva signifies the pure structure of an individual’s soul.

The 6th incarnation of Lord Shiva is named ‘Sharabh’. This Lord Shiva’s incarnation was in the form of a half-lion and half-bird beast, who had 8 legs. Not many know that Lord Shiva took this form to calm the Narsimha avatar of Lord Vishnu. This manifestation exhibited luck, health, and prosperity to its devotees.

The Piplaad avatar of Lord Shiva took birth to a sage popularly named Dhatichi. It is believed that his father left before his birth. Upon learning about a curse on his birth due to planetary positions, Lord Shiva cursed Shani Dev. However, there was a condition that Shani Dev will only be forgiven if he didn’t trouble anyone before 16 years of age.

(The above story first appeared on LatestLY on Mar 10, 2021 06:46 PM IST. For more news and updates on politics, world, sports, entertainment and lifestyle, log on to our website latestly.com).