Mehndi Designs for Akhuratha Sankashti Chaturthi 2021: From Arabic to Rajasthani, Latest Mehendi Patterns to Try on The Day Shri Ganesh is Worshipped 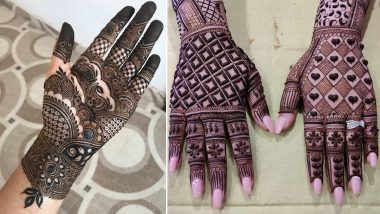 Akhuratha Sankashti Shri Ganesh Chaturthi fast is considered to be extremely auspicious for the Hindu community and it is considered fruitful to fast on this day. Ganesh Chaturthi fasting is dedicated to Lord Ganesha on Chaturthi Tithi of every month. According to the Hindu calendar, Akhurth Sankashti Chaturthi fast is observed on Chaturthi Tithi of Krishna Paksha of Pausha month. Akhurth Sankashti Chaturthi fast will be observed on 2 January 2021, Saturday. It is believed that by worshipping Lord Ganesha on this day, according to all rituals helps fulfil wishes. On this day, women apply Mehendi on their hands and get ready in their traditional best. People often look for quick 5-minute mehndi designs and simple henna patterns if the celebration isn't a biggie and some even look for bridal mehndi designs and Indian traditional henna photos.

With a variety of mehndi designs available such as Indian mehndi design, Arabic mehndi design, Moroccan mehndi art, Rajasthani mehndi pattern, Kolkata mehndi design, and more, you can get as creative as you want. During the Ganesh Chaturthi festival, people often get portrait Mehendi made that includes Ganpati designs. Sankashti Chaturthi fast is kept to achieve happiness, gaining learning, wealth, family happiness and getting rid of all the troubles of life.

(The above story first appeared on LatestLY on Jan 01, 2021 01:19 PM IST. For more news and updates on politics, world, sports, entertainment and lifestyle, log on to our website latestly.com).