It is being said that the arrival of Maa Durga will be done on a horse. On this day you can amp up your traditional look with the amazing Mehandi Patterns, mehndi designs and Arabic Mehendi designs. 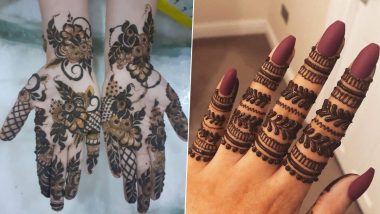 Happy Chaitra Navratri 2021! The nine-night festival holds special importance for the Hindus because from this day the Hindu New Year i.e. the New Samvatsara also begins. This festival is also seen as worship of Shakti aka maa Durga. After Holi, Chaitra Navratri begins and during this period Maa Durga is worshipped. This year, Chaitra Navratri will start from April 13 and will end on April 22. It is being said that the arrival of Maa Durga will be done on a horse. On this day you can amp up your traditional look with the amazing Mehandi Patterns, mehndi designs and Arabic Mehendi designs. We have for you an amazing set of easy mehndi designs 2021, Simple Mehndi Design, Mehndi Design Video, Mehndi Designs, Mehndi Designs 2021, Moroccan Mehndi Designs, etc. Chaitra Navratri 2021 Wishes, Greetings & Quotes: From 'Om Dum Durgaye Namaha' to 'Ya Devi Sarva Bhuteshu...' Nav Durga Mantras to Send as 'Happy Navaratri' Messages and Chant for Good Luck, Wealth & Happiness.

Chaitra Navaratri and Shardiya Navaratri occur twice a year. However, Gupt Navratri also comes twice a year, but Chaitra Navratri and Shardiya Navratri are more recognised. Samvat 2078 will begin on April 13. Navratri will begin on Chaitra Shukla Pratipada. Ghatasthapana is done on this day. The holy festival of Rama Navami also comes at the time of Chaitra Navratri. Lord Rama was born on the day of Chaitra Navami, hence it is called Rama Navami. Gangaur Puja will be on April 15, Durga Saptami April 19, Durgashtami April 20 and Sriramanavami on April 21 on the main dates of Navratri. Check out some of the best Mehndi Designs, Popular Mehendi Designs, Simple Mehndi Designs, traditional mehndi designs.

During Navratri, different forms of Maa Durga are worshipped for nine days. Devotees fast for nine days to get the blessings of Mother Durga. Also, during the nine days of Navaratri, nine forms are worshipped to please Maa Durga. Every day of Navratri, a form of Goddess Durga is worshipped. Goddess Durga has nine different forms - Shailaputri, Brahmacharini, Chandraghanta, Kushmanda, Skandamata, Katyayani, Kalratri, Mahagauri and Siddhidatri.

(The above story first appeared on LatestLY on Apr 11, 2021 07:00 PM IST. For more news and updates on politics, world, sports, entertainment and lifestyle, log on to our website latestly.com).