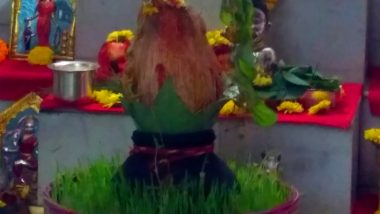 First of all, place the soil in a vessel with a wide mouth and sow saptadhanya in it. Now fill water in the urn and tie Kalava in its upper part. Place mango or Ashoka leaves on the Kalash. Coconut wrapped in Kalava and then wrap the coconut in a red cloth and place it on the top of the urn and in the middle of the leaves. After completion of Ghatasthapana, continue worshipping Goddess Durga.

April 15 Yellow (Tritiya): On the third day (Tritiya), Maa Chandraghanta is worshipped and yellow is worn.

April 16 Green (Chaturthi): On the fourth day (Chaturthi), the Kushmanda form of Maa Durga is worshipped and green is worn.

April 17 Grey (Panchami):  On the fifth day (Panchami), Skanda Mata is worshipped and Grey is worn.

April 19 White (Saptami): On the seventh day (Saptami), the Kalaratri form of Durga is worshipped and white is worn.

April 21 Sky Blue (Navami): On the ninth day (Navami), the Siddhidhatri form of Goddess Durga is worshipped and sky blue is worn.

Navratri is considered to be very special. On April 13 Chaitra Shukla Pratipada, the Vasanti Navratri Ashwani Nakshatra Sarvartha will begin with Amrit Siddhi Yoga and will conclude on April 22 Thursday with the Dashami Tithi in Magha Nakshatra and Siddhi Yoga.

(The above story first appeared on LatestLY on Apr 11, 2021 05:37 PM IST. For more news and updates on politics, world, sports, entertainment and lifestyle, log on to our website latestly.com).