When is Sakat Chauth 2021? What is the Chaturthi tithi? In this article, we will bring you all the details of Sankashti Chaturthi, including its puja time, history, vrat katha, moonrise timing and significance to worship Lord Ganesha. 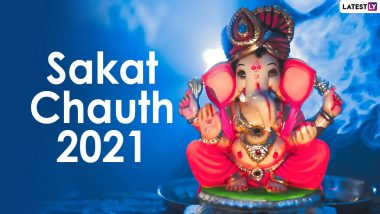 Lord Ganesha is always worshipped before the beginning of every ritual, puja or ceremony. The elephant-headed god is significantly revered among devotees, and every year, there are important days dedicated to him. In this month, Sakat Chauth is observed, which is also known as Lambodara Sankashti Chaturthi. Followers of Lord Ganesha observe a day-long fast and worship him to seek his blessings and to get rid of all the obstacles in their life. When is Sakat Chauth 2021? What is the Chaturthi tithi? In this article, we will bring you all the details of Sankashti Chaturthi, including its puja time, history, vrat katha, moonrise timing and significance to observe the auspicious occasion.

Lord Ganesha is widely worshipped as the god of wisdom, prosperity and good fortune and traditionally invoked at the beginning of any new venture or the start of travel. There are many legends associated with Sakat Chauth. As per one of the legends, the Devas, who were in distress, appealed to Lord Shiva for help. Lord Shiva asked both his sons, who were willing to take up the task. Interestingly, both Ganesha and Kartikeya were keen. Shiva asked his sons to circumambulate the earth, and the one who would first complete the task would get a chance to prove their might. Kartikeya began his journey. At the same time, Lord Ganesha walked around Lord Shiva and Devi Parvati while stating that his parents are the core of the universe.

This is how, Lord Ganesha was hailed for his wisdom and won everyone’s hearts. Since then, the tradition of offering the first prayer to Lord Ganesha is believed to begin. The rituals for Sakat Chauth involve devotees keep a partial or day-long fast. The main puja of the day is done in the evening after the moon is visible. After worshipping Lord Ganesha, the moon is prayed on Sankashti Chaturthi.

(The above story first appeared on LatestLY on Jan 29, 2021 12:26 PM IST. For more news and updates on politics, world, sports, entertainment and lifestyle, log on to our website latestly.com).