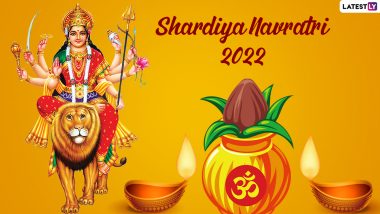 Navratri in India is celebrated four times a year and it is named after the Hindu seasons and the months they fall in — Magha (Winter), Chaitra (Spring), Ashadha (Monsoon), and Sharad (Autumn). Shardiya Navratri 2022, which is also known as Maha Navratri and Ashwina Navratri, is usually observed in the months of September and October, according to the English calendar, and is typically celebrated for nine nights, which is also the meaning of Navratri. Chaitra and Sharadiya Navratri are the most popular ones and Sharadiya Navratri is celebrated on a grand scale in most parts of India. Right before these nine nights, the festival of Mahalaya is celebrated, which is believed to be the day Goddess Durga was created as 'Shakti' to save all the gods and defeat the demon king Mahishasura. During these nine nights, the nine forms of Goddess Durga are worshipped all over India. Navratri celebrations usually culminate with Dussehra or Vijayadashami. Read on to know more about the dates, Ghatasthapana Muhurat time, puja rituals, history, significance and ways to observe Shardiya Navratri 2022. Navratri 2022 Colours List for 9 Days: Date-wise List of Colors to Wear Every Day for Sharad Navaratri, the Auspicious Nine-Night Festival Dedicated to Maa Durga.

Sharadiya Navratri 2022 will begin on September 26 and end with Dussehra being celebrated on October 5. According to Drik Panchang, many rituals are performed on all nine days. Puja Tithis for all nine days are given below.

Ghatasthapana Puja is one of the most significant rituals that take place during this festival dedicated to Maa Durga. It is also known as Kalash Sthapana and is done to invocate Goddess to the homes of devotees and bless the humankind over the period of next ten days.

According to Drik Panchang,

Sharadiya Navratri falls in the lunar month Ashwin during Sharad Ritu. According to Indian mythology, the origins of the celebrations of Sharadiya Navratri can be traced to the tale of Mahishasura, the King of Demons, who started a war against the gods in heaven. It is believed that to overpower him, all gods, including the famous trinity of Brahma, Vishnu and Shiva, combined their powers to create Goddess Durga, who was the mother of power or ‘Shakti’. As her power and wisdom killed Mahishasura after nine nights of battle, Navratri is observed for nine nights and the tenth day of victory is celebrated as Vijayadashami or essentially the day of victory of good over evil. Durga Maa is thus revered, respected and celebrated, especially on Vijayadashami. To celebrate the nine nights of battle, Goddess Durga is worshipped as Shakti (Goddess of power) for the first three days, as Lakshmi (Goddess of wealth) for the next three days and Saraswati (the Goddess of knowledge and wisdom) for the last three days.

Sharadiya Navratri ends with the Dussehra celebrations on the 10th day. In Indian mythology, Lord Rama set out to defeat the demon king Ravana, who was blessed with nectar in his navel that made him impenetrable. Lord Rama went to Lanka to rescue Goddess Sita, who had been abducted by Ravana, and during the battle, Lord Rama was believed to have defeated Ravana or Dashanana by killing him with an arrow in his navel. The day of Ravana’s defeat, which was a victory of good over evil, is now celebrated as Dussehra or Vijayadashami.

Navratri is celebrated in different ways in different regions of India. For some, it is a time of religious reflection and fasting, while others prefer to dance and feast.

West Bengal, Bihar, Orissa and Assam – In these states, Navratri is mostly celebrated in the last four days as Durga Puja.

Gujarat and Maharashtra – Navratri is one of the main festivals in these regions, where devotees keep a fast for nine days and worship Goddess Shakti. Traditional dance forms like Garba and Dandiya Raas are also performed by both men and women.

Punjab – In North India, people observe a fast for the first seven days and then break their fast in the next two days by worshipping Kanjakas, or nine young girls as a tribute to the goddesses.

Himachal Pradesh – When other states have wrapped up their grand festivities, Navratri celebrations start here on the tenth day. It is called Kullu Dussehra, which is for Lord Rama’s return to Ayodhya.

Kerala – The art of learning is celebrated during Navratri. For the last three days, books and musical instruments are kept near the idol of Goddess Saraswati while the puja is performed on these days.

Karnataka – Navratri here is called Naada Habba, and elephant processions are taken out on the road to celebrate the festival like it had been observed in 1610 during the Vijayanagara dynasty.

Dussehra, which marks the victory of Lord Rama over Ravana, is seen as the culmination of the Navratri festival. It is celebrated widely with effigies of Ravana being burnt on this day with fireworks to signify the victory of good over evil.

(The above story first appeared on LatestLY on Sep 14, 2022 04:02 PM IST. For more news and updates on politics, world, sports, entertainment and lifestyle, log on to our website latestly.com).