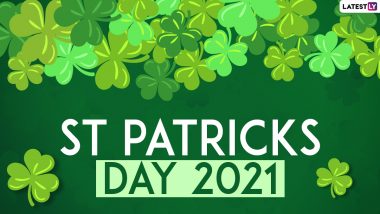 Saint Patrick's Day 2021 will be celebrated on March 17. St. Patrick's Day observes the death of St. Patrick, the patron saint of Ireland. The holiday is observed in Ireland with parades, special foods, music, dancing, drinking, and wearing green outfits.

Saint Patrick was born in the late 4th century in Roman Britain. He was kidnapped at the very young age of 16 and taken to Ireland as a slave. He escaped but returned to Ireland in 432 AD on a mission to convert Irish people to Christianity. He established monasteries, churches, and schools. He died on March 17, 461 AD. There are many popular stories about him. One such example is that he drove the snakes out of Ireland and used the Shamrock to explain the Trinity. Therefore, his life is celebrated in Ireland on this day with religious services and feasts. St Patrick is credited with successfully spreading Christianity in Ireland. Happy St Patrick's Day 2020 Wishes and Parade Photos: WhatsApp Stickers, GIF Images, Facebook Greetings, Photos, and SMS to Send Wishes on Feast of Saint Patrick.

St. Patrick's Day initially started as a religious celebration in the 17th century to commemorate Saint Patrick's life and Christianity's arrival in Ireland. The Irish immigrants brought the tradition over to America. The celebration started to become the symbol of Irish culture.

In the year 1903, Saint Patrick's Day became a national holiday in Ireland. The holiday has since been celebrated worldwide in countries like the USA, Britain, Canada, Argentina, Australia, New Zealand, Switzerland, Russia, etc.

Earlier, Saint Patricks Day used to be a simple feast where people went for mass, participated in a parade, and eat a hearty meal with the family. But now it has become a big day of celebration worldwide. St. Patrick's Day 2020 Celebrations and Parades in Ireland Cancelled Over Coronavirus Pandemic.

Saint Patrick's Day tradition includes eating corned beef and cabbage. People join parades of traditional Irish dancers and musicians as they march through city streets. Irish commonly participate in the parade wearing green clothing, resembling the Irish national plant, Shamrock. Corned beef and cabbage are associated with the feast, and even beer is dyed green to celebrate the day.

(The above story first appeared on LatestLY on Mar 03, 2021 01:52 PM IST. For more news and updates on politics, world, sports, entertainment and lifestyle, log on to our website latestly.com).