Teachers' Day Dates Around The World: When Does India and Other Countries Celebrate This Day

Around the world Teachers' Day is celebrated on different days and in varied ways. Let us look at when and how some other countries celebrate Teachers' Day. 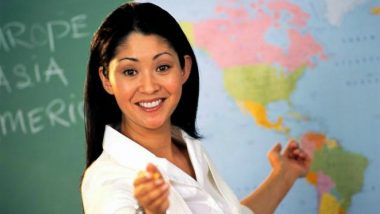 Indian students and teachers both celebrate a day honouring the teaching profession on September 5 every year. Teachers' Day marks the birth anniversary of our second president Dr Sarvepalli Radhakrishnan. He was an excellent teacher and he was the one who wanted to celebrate his birthday as Teachers' Day rather than any other occasion as his students suggested. Although this is not the only day we Indians celebrate for our teachers. We also have the festival of Guru Purnima, which is followed by certain communities honouring the spiritual gurus and teachers. Similarly, around the world Teachers' Day is celebrated on different days and in varied ways. Let us look at when and how some other countries celebrate Teachers' Day.

Bhutan Teachers' Day: Just as India celebrates Teachers' day to mark the birth of our second president, Bhutan celebrates the day marking the birth anniversary of the third King of Bhutan on May 2, Jigme Dorji Wangchuck. He was the one to introduce modern education in the country.

Brazil Teachers' Day: Teachers' Day celebration was started by a decree regulating elementary schools in the country. October 15 is designated as Teachers' Day since the year 1963.

US Teachers' Day: Unlike any other country, the Teachers' Day celebrations in the United States go on for a week. It is known as Teachers Appreciation Week and it has been done since the year 1984. The day is officially celebrated on the first Tuesday in May, although it continues for the entire week.

Malaysia Teachers' Day: The Federal Legislative Council of the Federation of Malaya adopted the Razak Report, regarding the education in Malaysia on May 16, 1956. Since then the day is celebrated as Teachers' Day in Malaysia. It is called as 'Hari Guru.' The Razak Report is named after Education Minister Tun Abdul Razak and it is a very important document regarding the educational policies in the country. There is no holiday but students make it a special day for their teachers.

Singapore Teachers' Day: Singapore doesn't have a fixed date but the first Friday of September is celebrated as Teachers' Day in Singapore. This year it will be celebrated on September 7. It is an official holiday and the celebrations are held a day prior. Teacher’s Day 2018: Simple, Inexpensive and Thoughtful Gift Ideas for Your Teachers.

Thailand Teachers' Day: The first Teachers' Day in Thailand was celebrated in the year 1957 after a year-long resolution. January 16, the Teachers' Day marks the enactment of the Teachers Act, Buddhist Era 2488 (1945). Most schools remain closed for this day to give a good break to the teachers.

World Teachers' Day: Most of the countries mark their Teachers' Day celebrations in sync with UNESCO's Recommendation concerning the Status of Teachers on October 5. This day was established in the year 1994 and it commemorates the signing of the 1966 "Teaching in Freedom". Each year there is a different theme to it. The day aims to appreciate, assess and improve the teachers around the world.

So as the dates differ, the celebrations also differ. Some countries have a complete holiday for the teachers as well as students, while in others students play the role of a teacher, giving a break to the teachers. How do you plan to celebrate your Teachers' Day?

(The above story first appeared on LatestLY on Aug 30, 2018 09:04 PM IST. For more news and updates on politics, world, sports, entertainment and lifestyle, log on to our website latestly.com).