Today on Feb 26, we observe the 55th death anniversary of Veer Savarkar. Born in 1883 in Mumbai (then Bombay), Veer Savarkar was a revolutionary of the Indian freedom struggle. 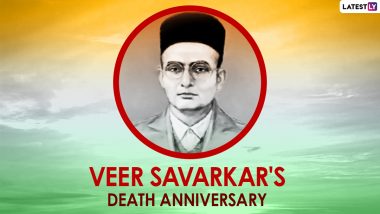 Today on Feb 26, we observe the 55th death anniversary of Veer Savarkar. Born in 1883 in Mumbai (then Bombay), Veer Savarkar was a revolutionary of the Indian freedom struggle. Along with this, he was a politician, lawyer, writer and exponent of Hindutva philosophy.  For about 25 years, Savarkar was a prisoner of the British for one reason or the other. He was sentenced to two separate sentences of 25 years each and sent to Andaman i.e. 'black water' (kala pani) away from India to serve the sentence.

But from here Savarkar's second life begins. His 9 years and 10 months in jail ended Savarkar's opposition to the British rather than increasing them. In the year 2000, the Vajpayee government sent a proposal to the then President KR Narayanan to confer 'Bharat Ratna', India's highest civilian honor, to Savarkar.

On the sixth day of Mahatma Gandhi's assassination in 1948, Vinayak Damodar Savarkar was arrested from Mumbai for his involvement in the conspiracy to assassinate Gandhi. However, he was acquitted in February 1949. Today on his death anniversary netizens shares tributes in forms of quotes, pics, HD images and sayings:

Tributes to the great revolutionary Vinayak Damodar Savarkar on his death anniversary. When many called 1857 a Sepoy Mutiny, Veer Savarkar called it the 'First War of Indian Independence'. He ignited the spark of nationalism in several lives !#VeerSavarkar @PRanagallu pic.twitter.com/ckqJuef2yo

The arrest of #VeerSavarkar on sovereign land of France raised a storm in the International circuit. Veer Savarkar became the first Indian patriot whose case was fought in the International Court of law ! His leap continues to inspire patriots ! pic.twitter.com/NIHwnZaUxx

Tributes to the great #VeerSavarkar on his Punya Tithi.

Veer Savarkar was a visionary, revolutionary patriot and a brilliant personality.

Pay my respects to Veer Savarkar, raging hero of the freedom movement, revolutionary, great thinker, immortal son of the nation on his Vardhanthi pic.twitter.com/BX6ZfHAsz5

Too early in life, Savarkar began his political activities as a high school student. He continued with them at Fergusson College in Pune. He and his brother founded a secret society called Abhinav Bharat Society.

(The above story first appeared on LatestLY on Feb 26, 2021 09:19 AM IST. For more news and updates on politics, world, sports, entertainment and lifestyle, log on to our website latestly.com).