When is Chandra Grahan 2022? Here Are Some Intriguing Facts You Need To Know About the First Lunar Eclipse of the Year!

The western hemisphere will witness the first lunar eclipse of the year 2022 on May 15 and 16 as per their respective time zones. In astronomical terminology, a lunar eclipse or Chandra Grahan is a relatively common phenomenon, that is more easily observed. Scroll down to know about some of the eye-opening facts about Chandra Grahan. 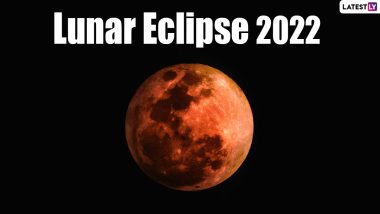 In 2022, billions will be able to see two total lunar eclipses, dazzling meteor showers and many more celestial events. The very first Lunar Eclipse of the year will occur on Monday, the 16th of May. The Moon will move into the Earth's shadow at 10:10 p.m. EDT on May 15 and 7:40 am as per IST on May 16. The lunar eclipse will last for three hours and twenty-seven minutes and will completely be visible in South and North American countries, majority of the West Africa and a few countries in the middle east. Indians can witness the astronomical event through live streaming on NASA's social media channels. When Is Lunar Eclipse 2022? Know Date, Visibility in India, Timing – Everything About Year’s First Chandra Grahan Falling on Buddha Purnima.

Furthermore, this month's Surya Grahan, as rendered in Hindi is termed as 'Blood Moon' as the colour of the star will appear in a red-tinted hue on the Night of the event. Since the occurrence of a lunar eclipse is quite common, it is essential to widen our horizons of such an astronomical event. Read about some scientific and amazing facts about the celestial event below. Astronomical Events in 2022: From Total Lunar Eclipse in May to Partial Solar Eclipse in October, Check Full List of Celestial Event Calendar.

1. You will only witness a Lunar Eclipse during a Full Moon Day.

2. The longest duration of totality which means when the moon is completely darkened for a lunar eclipse is 106 minutes.

3. The 'Danjon Scale' is a scale used to describe the darkness of a total lunar eclipse.

4. As per NASA's explanation, the golden, red and orange colour of the moon during a total lunar eclipse depends on how much dust, water, and other particles are in Earth's atmosphere.

5. Unlike, Solar Eclipse, stargazers can look directly at the Moon with naked eyes during a lunar eclipse because the Moon is not giving off its own light.

6. In ancient times, people hold the belief that during total lunar eclipse or disappearance of the Moon meant the gods were angry with the people.

7. Christopher Columbus once used his knowledge of Lunar Eclipses to get out of a jam.

In astronomical terminology, a lunar eclipse or Chandra Grahan is a relatively common phenomenon, that is more easily observed. As such, a total eclipse can be seen from any given location.

(The above story first appeared on LatestLY on May 11, 2022 04:52 PM IST. For more news and updates on politics, world, sports, entertainment and lifestyle, log on to our website latestly.com).