World Biofuel Day 2020: Know Date, History and Significance of the Day Raising Awareness About the Importance of Non-Fossil Fuels as an Alternative to Conventional Fossil Fuels 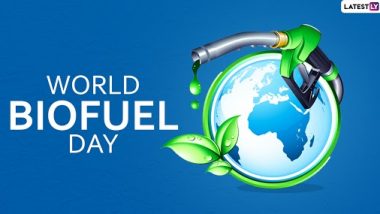 Every year, the World Biofuel Day is observed August 10. The special day aims to create awareness about the importance of non-fossil fuels as an alternative to conventional fossil fuels. Bio-fuels are basically green fuels which are environment friendly fuels and their utilization would address global concerns about containment of carbon emissions. They are renewable, bio-degradable, sustainable and environment friendly fuel. It can be seen as alternative to conventional fossil fuels. Biofuels have the benefits of reducing import dependency on crude oil, cleaner environment, additional income to farmers and employment generation in rural areas. In India, the biofuels programme is also in synergy with the Government of India initiatives for Make in India, Swachh Bharat and enhancing farmers’ income.

It was in 1893 on August 9, that Sir Rudalph Diesel, who was the inventor of the diesel engine, had run the mechanical engine with Peanut Oil for the first time successfully. According to history, his research experiment had predicted that vegetable oil is going to replace the fossil fuels in the next century to fuel different mechanical engines. In a bid to mark this extraordinary achievement, World Biofuel Day is observed every year on August 10.

The special day is aimed at reducing dependency on biofuel and adopting alternative sources of energy and effective management of fuels. The day is observed to create awareness about the importance of non-fossil fuels as an alternative to conventional fossil fuels. In India, the Government approved the National Policy on Biofuels-2018 in June 2018. It has the objective of reaching 20% ethanol-blending and 5% biodiesel-blending by the year 2030.

(The above story first appeared on LatestLY on Aug 09, 2020 08:00 PM IST. For more news and updates on politics, world, sports, entertainment and lifestyle, log on to our website latestly.com).