How Many French Fries Should You Eat at One Go? This Harvard Scientist Has The Answer And Twitter is Enraged!

This Harvard scientist is Twitter new most-hated person after he prescribed the perfect number of fries you should eat. 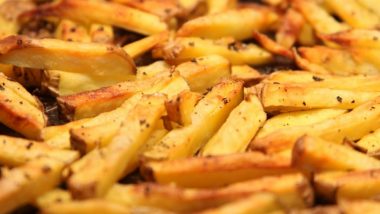 Is there anyone who can resist French fries. How many times have we told ourselves that we will stop but couldn't? As delicious as they are, fries are a deep-fried food, often fried twice to improve its crispiness. It’s sodium nightmare and a rather unhealthy combination of carbs and fats. It doesn’t help that it’s highly addictive. And now Twitter is baying for the blood of a Harvard scientist who has prescribed the ideal number of fries you should eat at one go.  To stay safe from the health hazards of eating fries, he says that the number you should eat at a single sitting is six!

In an interview with the New York Times, Eric Rimm, a professor with the Harvard T.H Chan School of Public Health quoted a study in The American Journal of Clinical Nutrition that said that potatoes have a high glycaemic index, which increases the risk of obesity, diabetes and heart diseases. The study said that people who ate fried potatoes two-three times a week had a higher mortality risk. Fries vs Chips Has Divided The Internet, Look What is The Difference Between These Potato Snacks.

French fries have also been linked to cancer due to the chemical acrylamide. When certain starchy foods like potatoes are heated to 120 degree Celsius, acrylamide levels increase. A high amount of the chemical in foods increases cancer risks. McDonalds India Reduces Oil and Sodium in Its Burgers and Fries, Expert Says Fast Food Is Still Not Safe.

Rimm described French fries as “starch bombs” and said, “I think it would be nice if your meal came with a side salad and six French fries.” And this has naturally not gone down well with the netizens.

While people are convinced about the dangers of eating fries, they feel attacked about the measly serving size.

Here are some of the impassioned reactions on Twitter:

the @nytimes just published an article saying #frenchfries are bad for you. we know that?? how is it news???

No thanks, I'm fine without the expert advice on how to eat fries.

I love you, NY Times. But you cannot take my fries... I'll eat as much organic kale and asparagus as any civilized Cali girl, but don't touch my fries. 🍟

Me: the New York Times is a great new source.

— Kristin Clifford But Something About Christmas (@kristincliff) December 1, 2018

Those who ate too few french fries had a 100% death rate. https://t.co/XHWW8cVo8z

Not to mention, everybody knows that the ideal serving of french fries is "all the crunchy ones".

First of all, how dare you.

French fries are one of the most widely-consumed junk foods, equally loved by the vegetarians, vegans and meat-eaters. Sadly for chips lovers, eating fries regularly is also one of the quickest ways to die. You may not agree with the Harvard scientist's advice of having just six pieces of fries at a go, but exercising moderation may be the key to enjoying fries and not compromising on your health.

(The above story first appeared on LatestLY on Dec 03, 2018 07:29 PM IST. For more news and updates on politics, world, sports, entertainment and lifestyle, log on to our website latestly.com).