Salmonella Outbreak Linked to Onions Hits US: From Symptoms to Prevention, Here's Everything You Need to Know

According to US Food and Drug Administration, onion-linked growing Salmonella outbreak has sickened more than 600 people so far. 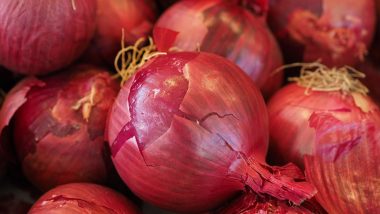 New Delhi, October 21: Food and health authorities in the United States have launched an investigation into onion-linked growing Salmonella outbreak. More than 30 states in the US have reported cases of Salmonella Oranienburg infection. According to US Food and Drug Administration (FDA), this outbreak has sickened more than 600 people so far. Onions imported from Chihuahua, Mexico, and distributed by ProSource Inc have been identified as a source of infection. What Is Monkey B Virus, That Caused the First Human Death in China? From Symptoms to Transmission and Prevention, Know Everything About the Rare Infection.

In a bid to contain the Salmonella outbreak, US FDA said ProSource Inc. has decided to recall red, yellow, and white onions imported from Chihuahua with import dates from July 1, 2021 through August 27, 2021. Here's everything you need to know about Salmonella Oranienburg infection. Norovirus Outbreak in United Kingdom: What is Norovirus? From Symptoms to Spread of 'Vomiting Bug', All You Need to Know About Highly Contagious Infection.

Salmonella is the type of bacteria. This bacteria is the cause behind most cases of food-related illness in the United States. Illness from these bacteria is officially called salmonellosis. According to US Centres for Disease Control and Prevention of CDC, Salmonella bacteria cause about 1.35 million infections, 26,500 hospitalizations, and 420 deaths in America every year.

Diarrhea, fever, and stomach cramps are major symptoms. Some people may also have nausea, vomiting, or a headache. An infected person usually develop symptoms within 6 hours-6 days after infection. Symptoms last 4-7 days.

Salmonella can be found in several food items such as vegetables, eggs, chicken, pork, fruits, and even processed foods. The infection can also spread from animals to people and from people to people.

Maintain good hygiene. Always wash your hands after contact with animals. Also wash your hands after using the toilet, changing diapers, or helping someone with diarrhea. If you are infected, do not make food for others. Don’t kiss cats, dogs, chickens, turtles, lizards, or other pets or animals. Never eat or drink around high-risk animals or in areas where they live and roam.

In order to prevent onion-linked Salmonella infection, do not sell or serve fresh whole red, white, or yellow onions that were imported from Chihuahua, Mexico and distributed by ProSource Inc. Check storage coolers for these onions. If you don't know where they are from, do not use them.

(The above story first appeared on LatestLY on Oct 21, 2021 11:57 AM IST. For more news and updates on politics, world, sports, entertainment and lifestyle, log on to our website latestly.com).