What Is Monkey B Virus, That Caused the First Human Death in China? From Symptoms to Transmission and Prevention, Know Everything About the Rare Infection

What is Monkey B Virus? From symptoms to prevention, here's everything you need to know about the infection. 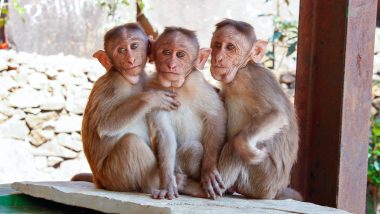 Mumbai, July 20: A veterinarian in China has died of rare Monkey B Virus (BV). The Beijing-based vet contracted Monkey B Virus a month after he dissected two dead monkeys in early March. He had received treatment at several hospitals but succumbed to the infection on May 27, China CDC Weekly English Platform of Chinese Center for Disease Control and Prevention revealed recently. It was reportedly the first human infection case with BV in China. What is Monkey B Virus? From symptoms to prevention, here's everything you need to know about the infection. What Is Monkeypox? Texas Man Found Infected With Viral Illness Caused by Monkeys, Know Its Symptoms, Transmission and Treatment.

What Is Monkey B Virus?

Also known as Herpes B or B-virus, the Monkey B Virus was initially isolated in 1932. The virus is an alphaherpesvirus enzootic in macaques of the genus Macaca. Macaque monkeys commonly have this virus. Hence, it is called Monkey B Virus. The B-virus infection has a fatality rate of 70-80 percent. White Fungus Causes, Prevention, and Treatment: Signs and Symptoms of the Infection That Is Said to Be More Dangerous than Black Fungus.

According to US Centre for Disease Control and Prevention or CDC, infected macaque monkeys can transmit Monkey B Virus to humans. The virus can be found in infected monkeys' saliva, feces (poop), urine (pee), or brain or spinal cord tissue. The virus can spread if one is bitten or scratched by an infected monkey. You contract the virus if you get an infected monkey’s tissue or fluid on your broken skin or in your eyes, nose, or mouth. A large population does not come in contact with monkeys, so their risk of getting infected with B virus is very low.

What Are Symptoms of Monkey B Virus Infection?

Initially symptoms include fever and chills, muscle ache, fatigue and headache. An infected person may develop small blisters in the wound or area on his/her body that had contact with the monkey. Other symptoms may include shortness of breath, nausea and vomiting, abdominal pain and hiccups. If the B-virus spreads, it causes inflammation (swelling) of the brain and spinal cord which may lead to death.

There are no vaccines to prevent Monkey B Virus infection. If one is in a place where there are macaque monkeys, s/he should stay away from them so that they don't bite or scratch. One should also not touch or feed monkeys. If you are exposed to macaque monkeys, you should thoroughly wash and gently scrub the wound or area on your body that had contact with the monkey with soap, detergent, or iodine for 15 minutes. After, run water over the wound or area for 15 to 20 minutes more. Then, get medical assistance immediately.

(The above story first appeared on LatestLY on Jul 20, 2021 12:36 PM IST. For more news and updates on politics, world, sports, entertainment and lifestyle, log on to our website latestly.com).