MS Dhoni Adds to His Car Collection by Getting a 1969 Ford Mustang, Check Post

Dhoni's love for cars is unprecedented and he recently gifted his wife Sakshi a vintage Volkswagen Beetle on the occasion of their 11th marriage anniversary. 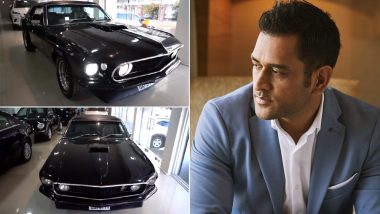 Apart from his calm-headed finishes and powerful hitting, former India captain Mahendra Singh Dhoni is also quite well-known for his car collection. And he recently added to that, in form of 1969 Ford Mustang muscle car. Dhoni, recently gifted a vintage Volkswagen Beetle to his wife Sakshi Dhoni on their 11th marriage anniversary. Ford, quite recently, launched their range of Mustang muscle cars in India and what Dhoni now possesses is a 1970 model, whose headlights have been modified and restored to give it a look of the 1969 model.Sachin Tendulkar Wishes MS Dhoni on His Birthday, Calls Him ‘Colleague, Captain & Friend’

See the video of his car here:

The engine of this car is a V8 engine that is able to generate 225 Ps and 406 Nm of peak torque. The interiors of the car has been designed with Italian leather.MS Dhoni Gifts Wife Sakshi a Vintage Car on 11th Wedding Anniversary (See Pic)

Dhoni, an avid automobile lover, also possesses a Hummer H2, Nissan 1 ton Jonga and Jeep Grand Cherokee TrackHawk, an SUV. Apart from cars, he also owns a lot of motorcycles and his collection includes, Yamaha RD350, Harley Davidson Fatboy, Kawasaki Nina ZX 14R, BSA Goldstar and Ninja H2 among others. He was last seen in action during the Indian Premier League this year.

(The above story first appeared on LatestLY on Jul 08, 2021 04:26 PM IST. For more news and updates on politics, world, sports, entertainment and lifestyle, log on to our website latestly.com).