One might still ask: what is the point of investing in natural resources if green energy is the future? The simple answer is that the green energy revolution is being powered by fossil fuels. Natural resources make up 80% of all energy produced today, and by 2040, will still make up between 64-74% of the equation. 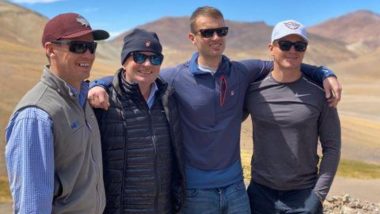 Green, clean, and hungry, the new kids of the natural resources industry are here to stay

Now in its third generation and with fifty years in the business, the Lundin family has cemented itself as one of the leaders of the natural resources sector in the environmental and social governance (ESG) age. Fifty years since Adolf Lundin began selling stocks in a university basement in Stockholm, there are fourteen publicly traded companies currently under the Lundin Group. But what does it mean to be a Lundin Group company? First and foremost, the companies see themselves as incubators for the best and the brightest.

One would be hard-pressed to find a natural resources conglomerate with more engineers on their boards than Lundin Group. In an age of energy corporations increasingly run by bankers, traders, and asset managers, Lundin has held on to its lasting curiosity and consideration for the terra incognita below. Perhaps the largest reminder of its Swedish roots, though now long intermingled with Swiss efficiency and Canadian grit, is the idea that experience on the ground shall be rewarded.

The four sons of Lukas Lundin started off working in the mines that they would one day oversee. Summer holidays were spent at dusty dig sites and amidst the roar of boring machinery across the Americas, putting to test what their mining engineering degrees taught them. Today, Harry Lundin, the oldest, runs a natural resource fund, Bromma Asset Management. Before then, he worked on the Karowe mine in Botswana, unearthing the largest diamond found for 100 years, weighing 1,758-carats. Will Lundin is CEO of International Petroleum Corp., and even the youngest, Jack Lundin, has had a formidable career—starting as the Superintendent at Fruta del Norte, to CEO at the Cerro Blanco Gold Project in Guatemala, to now heading Bluestone Resources as CEO.

Do they bear the same weight on their shoulders as their grandfather and father bore before them? Undoubtably. Though one has to consider that this weight has taken a different shape. No longer does Lundin Group need to prove itself as a titan of industry- instead, it must carry the future of natural resources into a new age. Lundin has found itself facing terra incognita yet again. Sharing the same trailblazing spirit as his grandfather, Adam Lundin has decided overcoming this challenge will define his career.

Adam Lundin has a CV longer than most for his young age. Third youngest out of Lukas’s four sons, he was brought up working in the mines that he would one day oversee. With experience in capital markets and managing equity investment in London, Adam today heads the majority of Lundin Group’s mining divisions as Chairman of Filo Mining Corp. and Africa Energy Corp., Director of NGEx Minerals Ltd.  and the Lundin Foundation, and President and CEO of Josemaria Resources. If gold was his father’s game, it’s his job to get copper its day in the sun.

For the uninitiated, the copper market might appear opaque. With glacier returns on investments, decades-long timelines, and a finicky stock market, shareholders stick around for the big pay-outs when production finally is cleared. Copper prices were on the rise in early 2020, but the Coronavirus pandemic and the slowdown of the Chinese economy put an end to it. In an interview with KITCO last year, Adam said that “we are starting to see commodity prices grow again, and the time is right for the development of copper products.” With Lundin’s Filo del Sol project having just completed its feasibility study, and the Josemaria site starting copper production this summer, it is cause for confidence about the resurgence of the natural resources market.

But in the mining industry, it has been said you’ve already lost if you haven’t thought about the next site and next opportunity for shareholder returns. There are a stupendous amount of things to consider when opening up a mining site. You must find the right core body of people to do the speculation work and the finances. Then comes contacting the host nation, asking them if they are receptive to putting their natural resources into production. Election cycles also matter. When will you be taxed, and who wants which jobs to go where matters. It’s common to sit down with the president and get a sense of if they are pro-business and what they think about mining. Then, the real work can begin-- digging. “The mining industry keeps you busy,” Adam joked in an interview with Palisades Gold earlier this year.

A family that has always put faith in a trial by fire, Lukas Lundin – like his father did before-- leads by example. “He doesn’t give us too many one-liners on how to do our jobs,” Jack said in an interview with KITCO. Perhaps the one that has lasted longest came from Adolf Lundin himself, who claimed his “sons may not ask for my advice more often than President George W. Bush asks for his father’s.” The long shadow the legacy of the Lundin lineage casts would be enough to make more than most crack under the pressure. But not the four of them. “I haven’t had the time to feel the pressure,” Adam said to Palisades Gold, smiling. “I want to succeed, I want to create a lot of wins, and that will come in time.”

Without a doubt, that time is approaching. The mining sector is one of many in the natural resources industry with a reputation as an old man’s game. It will be up to his generation to make the industry attractive to the next cohort of engineers, the young men and women with a shared vision towards decarbonisation and the ushering in a green energy revolution. Open-mindedness is going to play the biggest role in the future of the mining industry, Jack believes. “Natural resources produce everything that is possible. Everyone wants to go into tech, but they don’t realise where their instruments come from,” he said to KITCO. “Look at the electric vehicle revolution, for example. That’s all copper.”

Part of the problem of this brain drain, Adam believes, is the slow uptake by Lundin’s competition on becoming attractive to environmental and social governance (ESG) investors. Perhaps this is the biggest challenge the Group faces, as the investment in human capital is at the core of the Lundin business model. What has perhaps come to define the Lundin Group the best is the message that has been passed down three generations now: surround yourself with the best people, and the rest will follow. This is something Adolf Lundin swore by, and now his grandchildren. The reason for Lundin Group’s success is easy according to Adam: “there’s great people around me that I can lean on.”

Alex Schneiter at the helm of Lundin Energy is one of them. A graduate of Geneva University where he studied geology and geophysics, he has been with the Group since 1993. Now serving as a board member, he recently departed his role as President and Chief Executive Officer of Lundin Energy following a fourteen-year tenure as Chief Operating Officer. He was responsible for perhaps the most public face of Lundin Group’s new chapter into green energy, the decarbonisation of the gas and oil industry through the technological advancements playing out in the North Sea, where Lundin Energy’s operations have consolidated. Following the delivery of the world’s first carbon-free barrel of oil, the company has plans to decarbonise every aspect of their operations, from the electrification of oil rig operations, to tackling scope 3 emissions from helicopter flights to and from drill sites, and investing in onshore natural carbon capture projects. By 2022 they will have spent $750 million USD on the optimisation and reduction of emissions, and are on track to reach zero carbon emissions by 2030.

One might still ask: what is the point of investing in natural resources if green energy is the future? The simple answer is that the green energy revolution is being powered by fossil fuels. Natural resources make up 80% of all energy produced today, and by 2040, will still make up between 64-74% of the equation. “The reality is that we haven’t yet found a replacement for the energy intensity oil and gas is delivering,” Schneiter said in an interview with Energy Council last year. “With time, technology will develop and things will change but oil and gas will continue to play an important role – just hopefully in the most sustainable way possible.”

Finding these possibilities has fallen to Erin Johnson, Managing Director of the Lundin Foundation. Johnson works closely with the whole human ecosystem that goes into every Lundin Group mining and drilling operation—from the heads of host countries to the on-the-ground project managers and CEOs, such as Adam Lundin—to come up with a playbook on how best to implement a social program in each local community. Mining operations are measured in the scale of decades, so making a positive environmental and social impact on the local community is integral. The Foundation’s gap assessment finds the most beneficial relationship between the local community that meets not only the host country regulations, but International Finance Corporation (IFC) voluntary standards. For instance, Lundin Gold was awarded by the United Nations for Good Practices in Sustainable Development on behalf of its Training Program for Mining Operations with the Fruta del Norte local community.

“We view ourselves as contractors,” Adam explains. “When you’re coming into a host nation, you’re helping them benefit from the natural resources they’ve been endowed with. And so with that view, everyone wants to benefit themselves.”

On the back of ESG investment, how is Lundin preparing to draw in the next generation? For Adam, it’s simple: education. Alongside Jack, they are developing a close partnership with their alma mater, the Lowell Institute for Mineral Resource at the University of Arizona. Investing in the school offers not only better training for the next generation of miners, but the chance to find and nurture the leaders that will carry the industry into the green revolution. As Schneiter said, “provided you are open to all these changes and you embrace the challenges… like electrification, new technologies, digitalisation and other processes, renewables and natural carbon capture, then new talent will want to speak to you.”

“Mining business is a long term game. There’s no such thing as short wins in the mining business. You have to have that long term vision when you enter a project,” Adam said. Perhaps this is true for Lundin Group as a whole. All too often family businesses are trapped by their own legacies, agonising over change. Lundin has not only accepted growth with eagerness, but used the shifting industry demands as the catalyst to remind the industry that it will remain a pioneer. Jack agrees: “My family is going to be in the business for a long time to come.”