The MurLarkey Experience: How a Master Chef Became the Master Distiller at One of America’s Fastest-Growing Craft Distilleries

What started as a side project evolved into an internationally acclaimed craft distillery renowned for its unique spectrum of award-winning spirits and unparalleled brand culture. In short, a movement had begun. 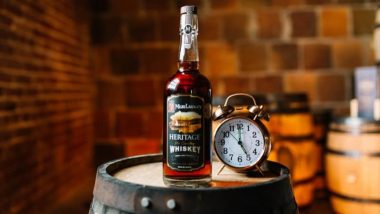 What happens when a retired Master Chef suddenly finds himself in a position to expand the horizon of his latest passion, distilled spirits? Magic!

That’s exactly what happened to George Zwetkow, former Master Chef and now the Master Distiller of MurLarkey Distilled Spirits, one of the fastest-growing craft distilleries in the country.

Six years ago, Zwetkow’s son-in-law Mike Larkin and Mike’s cousin Tom Murray were getting serious about starting a new and “different” distillery.

“Tom and I and my brother Jim had talked about starting a family business on and off for years,” said Larkin, who served as MurLarkey’s President until turning operations over to his brother Jim in 2016. “When I approached Tom with the notion of a distillery he liked it as much as I did, and so it began.”

“Tom ran with the business administration, and I ran with the product development with Papi. Jim joined us shortly after to run operations, and [Head Distiller] Kevin Szady came on about a year into operations.”

What started as a side project evolved into an internationally acclaimed craft distillery renowned for its unique spectrum of award-winning spirits and unparalleled brand culture. In short, a movement had begun.

“We knew that we wanted to produce something special,” said Murray, now MurLarkey’s CEO.  “We wanted to create a product line and an experiential vibe that captures and shares the renowned hospitality and good times our Irish heritage is famous for: that sense of joy, belonging and family, complemented by spirits that bring you back to that happy place with each sip.”

“While it’s always an honor to win a medal on the big stage, it is paramount to us that our spirits also continually echo the experience, the culture of MurLarkey in every bottle,” said Jim Larkin, MurLarkey’s COO.

Zwetkow, or “Papi” as he’s known around the distillery, personifies this MurLarkey culture. He’s devoted his life to hospitality and achieving culinary excellence. His mantra is simple: “There are no shortcuts to greatness.”

Zwetkow was trained at the world-famous Culinary Institute of America in world cuisines and techniques.  After graduation in 1971, he got his start by opening the Contemporary Hotel at Disney World. He then returned home to New York to work as a private chef for families including the Mellons, Whitneys and Claus and Sunny von Bülow.

In 1980, Zwetkow became the Executive Chef of the Private Dining Room at Time Warner in New York’s Rockefeller Center; a position he held for over 15 years.  In 1998, he took the position of Executive Chef and General Manager of the Executive Dining Room for Lazard Freres LLC, one of the largest investment banking firms in the world. Zwetkow retired in the mid-2000s and moved to Virginia with his wife, Janet (who now manages the distillery’s gift shop) to be closer to their grandchildren and their wild Irish in-laws.

“When the boys got MurLarkey started, I couldn’t wait to jump in with both feet,” Zwetkow said. “Distilling was a secret passion of mine for some time, and I couldn’t wait to apply my expertise to the development and production of spirits.”

“Today, Kevin and I are stretching the boundaries of the craft spirit business with unique mash bills, all-natural infusions, multiple distillations, variable char and aging techniques and botanicals.”

From their pleasantly floral gold medal-winning ImaGINation™ Gin to any of their delicious infused whiskeys, all of MurLarkey’s spirits contain Zwetkow’s magic touch and echo the MurLarkey culture in every sip. The amazing variety of award-winning products offers something for everyone.

So, what’s next for MurLarkey Distilled Spirits? In the coming months, Zwetkow and his team will be getting back to the basics, focusing on an upcoming Bourbon release that is now aging.

MurLarkey just released their ultra-small batch Honey Whiskey, which is only bottled twice a year and made with all-natural honey from Zwetkow’s own beehives, and are working on a secret infused whiskey which Zwetkow promises will be quite ground-breaking.  In addition, they will be introducing a line of ready-to-drink, boxed whiskey cocktails in time for spring.

Zwetkow and the entire MurLarkey family are ready to push the envelope and have some good, clean fun. That’s the MurLarkey way, after all: blending prestige and playfulness to create amazing craft spirits and an inviting experience for all to enjoy. In this big, fun-loving Irish family, there’s a seat for everyone at the MurLarkey table.