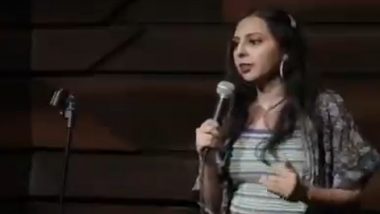 In her video, which appeared in April 2019, Agrima Joshua is seen telling "funny things" that she read about the proposed Chhatrapati Shivaji Maharaj's statue on "news source" Quora. "Someone wrote 'This Shivaji statue is amazing masterstroke by Prime Minister Modi Ji. It will have solar cells which will power all of Maharashtra," Joshua said. She was apparently making fun of those who blindly follow politicians. The jokes were part of her rant against politicians postponing everything to 2022 as elections came closer.

Please take strictest action against her

Dear @CMOMaharashtra,@AnilDeshmukhNCP,stand up Comedian @Agrimonious cracked jokes and made fun of Chatrapati Shivaji Maharaj She has hurt feelings of crores of Maharaj devotees across the globe

This woman is a stand up comedian and her name is

Agrima Joshua. There may be some legal action against this woman.? pic.twitter.com/u8cysU26PF

https://t.co/O4fYLecBWx agrima joshua is a standup comedian and in this show she made fun of chhatrapati shivaji maharaj. Watch that part from 5.08. This should not happen standup and insulting both are different things.!@mnsadhikrut .@MumbaiPolice pic.twitter.com/w1a4LBqcJD

Amid the outrage, in a series of tweets on Friday, Agrima Joshua accused the Bharatiya Janata Party (BJP) of "unleashing trolls" against her. She tagged Maharashtra Minister Aaditya Thackeray and tweeted: "BJP is just using Chhatrapati Shivaji Maharaj's name to silence us."

(The above story first appeared on LatestLY on Jul 10, 2020 06:54 PM IST. For more news and updates on politics, world, sports, entertainment and lifestyle, log on to our website latestly.com).