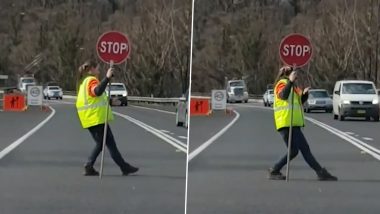 Your job can get pretty boring at times unless you decide to amp it up and make it interesting. A video of a traffic controller from Australia has been shared on Twitter and it shows the female officer busting a few moves on the road. While directing the vehicles on the road to move ahead, she bends and swiftly moves her hand to direct them forward. She is holding a Stop sign in her hand and balances herself with the help of it. It is sure amusing to see her work on the job in style, it reminds us of a similar officer from India. A police officer from Indore went viral for busting moves like Michael Jackson. Dancing Traffic Policeman in Odisha: This Home Guard Controls Traffic in Style; Watch Video.

The exact location of the video from Australia is not known, but it mentions it is from Australia highway. Not sure, if it is a recent video since she's not even seen wearing a mask. But her way of work will surely leave you with a smile. She's standing in the middle of the road where there seems to be some construction work going, so traffic is moving only on a single lane. As she controls the vehicles on either lane, she directs the vehicle with style. Before directing the vehicles from the lane to move ahead, she also bows to them with a smile. These Dancing Traffic Policemen From India Remind You No Job is Easy But Can Be Enjoyed, Watch Videos.

BUST A MOVE: Traffic controller shows off unique technique while directing vehicles on a highway in Australia. https://t.co/ceVS0wWTzU pic.twitter.com/0vcbDBfIVT

So jovial, isn't she? Surely make the waiting entertaining. She reminds us of another dancing cop from Indore, Madhya Pradesh who went viral a few years ago. A traffic cop named Ranjeet Singh became quite the star on the internet because of his effortless dance moves on the job. In the middle of rush hour traffic, Singh does moonwalk like Michael Jackson and controls the vehicular movement. His style earned him enough fame and people just love the way he does his job.

He's so awesome, isn't he? A pro at it, to be honest, if compared with the cop from Australia. At other times, when you would think how boring it would be to just stand on the street and directing vehicles, seeing the signals, these police officers really know how to make it interesting. So if you think your job is boring, check if you too can bust some moves, while at it?

(The above story first appeared on LatestLY on Aug 11, 2020 09:27 PM IST. For more news and updates on politics, world, sports, entertainment and lifestyle, log on to our website latestly.com).