Eyes popped out when an image flashed at the big screen of the superstar holding two babies, Beyhive at the concert certainly assumed the kids were hers. 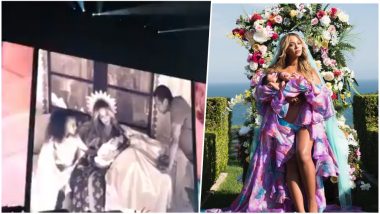 Beyoncé & Jay-Z Holding Babies in Photos From On The Run II Are not Their Twins (Photo Credits: @OTRIITour/ Twitter/ Beyonce/ Instagram)

Beyoncé and Jay-Z joint On The Run II tour opened on May 6 in the capital of Wales, Cardiff, United Kingdom. The hip-hop mogul and pop star’s was a two and a half hour display of affection. Apart from the mind-blowing show, fans speculated if the duo revealed another surprise; their twins, Rumi & Sir Carter. Eyes popped out when an image flashed at the big screen of the superstar holding two babies, Beyhive at the concert certainly assumed the kids were hers. But keep your calm because the babies were not their children!

As the power couple hit the stage together; both the musicians were seen on a screen joined by their 6-year-old daughter Blue Ivy, 11-month-old twins Rumi and Sir “This Is Real Love” the message projected during the short film at the concert reads while they sing their popular 2009 hit, “Young Forever.” Soon the footage went viral and Twitter is ablaze with excitement! “Rumi and Sir Carter debut on #OTRII!,” tweeted one user, while another wrote, “THE TWINS. GEMINI LEGENDS.” Fans going crazy over it was natural because the first they saw the twins was one month after their birth, in a family portrait. Proud mom Bey was holding the babies as she introduced them to the world.

But it turned a huge disappointment when recently a source close to the couple informed that the babies shown in the clip at OTR II was not theirs. “At the end of the show the Carter babies were included in a family collage [however] the babies in the film clip at the beginning were not their children,” a representative was quoted saying to People. Well, it seems that us Beyhive have to wait for some more time to see the real twins.

Despite all the buzz around Bey twins, Beyoncé and Jay-Z’s OTR II includes 15 European cities and North American performances. At the opening night, the couple raced through more than 40 hits; from Crazy In Love to 99 Problems, smiling, holding hands and teasing each other between the songs. “It feels so good to be on stage with the one I love,” media reports quoted while Beyoncé said the words during the end of the show.

(The above story first appeared on LatestLY on Jun 07, 2018 05:25 PM IST. For more news and updates on politics, world, sports, entertainment and lifestyle, log on to our website latestly.com).