Burger King UK Wins Hearts Once Again, After It Announces to Promote Independent Restaurants on Its Instagram Account for Free! Netizens Say ‘Pure Empathy’ Over Everything

Burger King in the UK decided to support and help struggling business in the country. The fast-food giant announced on social media that it would promote independent restaurants on its Instagram account for free. Netizens are impressed! 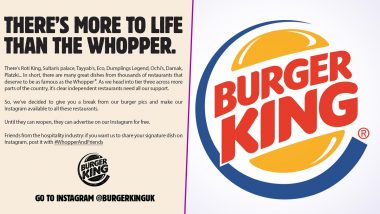 The COVID-19 pandemic has impacted businesses, both small and large, in a severe manner. Several industries, including the food and hospitality sector, continues to be devastated by the pandemic and figuring their way out to survive. At the time of such crisis, Burger King in the UK decided to support and help struggling business in the country. The fast-food giant announced on social media that it would promote independent restaurants on its Instagram account for free. The announcement was like music to the ears. Amid the time of a global health crisis, when the world economy is struggling every bit to survive, the smallest amount of empathy impresses everyone on the internet. Burger King’s announcement won hearts on the internet and netizens say, ‘pure empathy,’ over everything.

In November too, the fast-food chain urged its customers to order from McDonald’s, Taco Bell and independent restaurants in the United Kingdom, when the country entered a second national lockdown, with dine-in services off the menu. At the time too, followers were left impressed with its move. The recent announcement by Burger King came after the UK government said London and other regions in southern England would move into the strictest tier of coronavirus lockdown. Under tier-three rules, all on-site dining is reportedly banned, though restaurants and cafes can still offer takeout.

“There's more to life than the Whopper. There's Roti King, Sultan's Palace, Tayyab's, Eco, Dumplings Legend, Ochi's, Damak, Platzki.. In short, there are any great dishes from thousands of restaurants that deserve to be as famous as the whopper. As we had into tier three across more parts of the country, it’s clear independent restaurants need all our support,” reads the statement. It continued saying that the fast food chain decided to give everyone a ‘break from our burger pics,’ and make their Instagram available for all these restaurants. “Until they can reopen, they can advertise on our Instagram for free,” added Burger King. Restaurants who want to take part will have to upload their post to Instagram using the hashtag #WhopperAndFriends, and Burger King will repost them on its own Instagram account.

Burger King has had a different strategy this year

i never knew burger king would one day be my favourite fast food place 😍 https://t.co/0GF6s0Eycu

“Huge respect!!” wrote a commentator on Instagram. “How beautiful! Well done guys,” wrote another. This is undoubtedly a thoughtful move by Burger King. The hospitality sector is the UK was reportedly impacted significantly because of the coronavirus lockdowns. Many workers in the sector were placed on furlough during waves of national and local lockdown as restaurants, cafes and bars were forced to close.

(The above story first appeared on LatestLY on Dec 16, 2020 12:58 PM IST. For more news and updates on politics, world, sports, entertainment and lifestyle, log on to our website latestly.com).