Cheaters in Gujarat Board Exam Brings 200 Kgs of Chits! Junagadh Centre Is Flooded With ‘Micro-Sized’ Copies

Officials of Gujarat Secondary and Higher Secondary Education Board (GSHEB) had to request 20 bags in order to pack the chits as they were comprised of ‘micro-sized’ copies of answers. 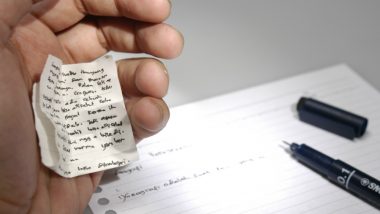 This year, almost all the educational boards in India have introduced stringent measures in order to curb mass cheatings. While Bihar Board students were barred from wearing shoes, Uttar Pradesh Board on the other hand tracked mobile phones of exam centre’s controllers for which they had to face a huge fallout in the number of students appearing board exams 2018. But Gujarat Board has just seized 200 kilograms of materials that would be used to cheat in the examinations. Yes! In fact, officials of Gujarat Secondary and Higher Secondary Education Board (GSHEB) had to request 20 bags in order to pack the chits as they were comprised of ‘micro-sized’ copies of answers.

The Times of India reported that the disclosure was made during a hearing at an examination committee of the Gujarat Board on May 23, 2018. The committee studied the matter and decided to beckon the exam supervisors and coordinator of the respective centres. Vice-chairman of Gujarat Board was quoted in the same report saying; “We summoned 15 students who were allegedly cheating, and we will also summon all the supervisors and the centre coordinator on May 31.”

The District Education Officer (DEO) of Junagadh, Gujarat B.S. Kella confirmed the incident as he received many complaints during the board examination, from one of the exam centres named, Swaminarayan Gurukul. To understand the situation, he along with other members of DEO reached the venue reportedly on March 14 when GSHEB class 10th exams were on. And he witnessed roads covered with small white papers. They further warned class 12 science students before their chemistry exams.

B.S. Kella said, “Taking note of this, we had strictly warned the class 12 science students to get rid of chits or any other copy materials before exam. We gave at least three warnings before the Chemistry exam and with every warning, some students submitted their copy materials to board officials. During the exam, we started frisking students and then also, we found around 15 students with copy chits.”

Education Department officials added that cameras were installed at the said centre and if the CCTV footage is checked; then more such wrongdoings will come out. There have been numerous steps taken by the state boards, but it seems that students cannot stop themselves cheating during the exams. The Gujarat Board officials informed that they have filed ‘copy cases’ against 15 students. They collected the chits which were submitted by the students themselves as well as the copies they found.

Meanwhile, Gujarat board is yet to declare its class 10th and class 12th results on their official website. Earlier this month GSHEB released class 12th arts stream results where 72.99 percent candidates successfully cleared the exam. Reports are speculating that officials will announce the board exam results for the academic year 2017-18 by the end of this month.

(The above story first appeared on LatestLY on May 24, 2018 05:43 PM IST. For more news and updates on politics, world, sports, entertainment and lifestyle, log on to our website latestly.com).