Fans are now wondering if The Simpsons had a prediction for Dogecoin too! Viral Twitter and Reddit posts claim how the show may have hinted at the meme-based cryptocurrency surge. So, did The Simpsons actually predict Dogecoin's rise? Let’s take a look! 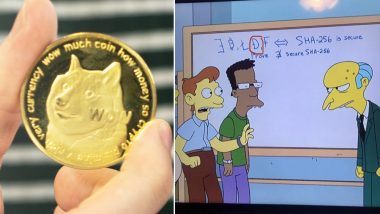 Once again, did The Simpsons predicted it? By now, it is no secret that one of the longest-running American TV shows did manage to produce several accurate predictions. Not only did the American sitcom foresaw Donald Trump’s presidency, but several other global events. The Simpsons have been running for decades now, so it’s inevitable that some themes cropping up in the show might occur in real life. But some of the plotlines are eerily close! The show often had references to cryptocurrency—something that continues to see a rising interest among people. Fans are now wondering if The Simpsons had a prediction for Dogecoin too! Viral Twitter and Reddit posts claim how the show may have hinted at the meme-based cryptocurrency surge. So, did The Simpsons actually predict Dogecoin's rise? Let’s take a look!

Dogecoin is the cryptocurrency branded after a viral dog meme from years ago. Tesla CEO, Elon Musk is a known fan of doge, and his viral tweets often helped the cryptocurrency reach newer heights. Musk recently hosted ‘Saturday Night Live,’ where he spoke about dogecoin, calling it the future of currency. In the last six months, the cryptocurrency’s value soared to newer heights, with many followers hoping its value to reach USD 1.

Whether or not, dogecoin will reach 1 dollar is yet to be seen, it appears Simpsons’ episode had a reference to the world’s latest obsession to doge. Fans of the show have taken to social media to point how the animated sitcom had reference to cryptocurrency.

Did The Simpsons Predicted Doge?

The Simpsons made a reference to cryptocurrencies in episode 13 of season 31. Titled, ‘Frinkcoin,’ the episode is about Professor Frink who wants to prove cryptocurrency has ‘real value.’ Mr Burns then hires mathematicians to work out how they can ruin the professor’s work. The episode telecasted last year in February. It had a reference, but not dogecoin rise.

There’s another image which is going viral on the internet. It’s a headline on a newspaper that’s raising the eyebrows, ‘Dogecoin reaches $1,” The pic first appeared on Reddit before it surfaced on Twitter. The user who posted the pic on Reddit claimed that the scene was from Season 13, Episode 13, which aired in March 2002.

It's a Fake Claim!

However, it appears to be edited, the claim is false, as another Reddit user confirmed and it was created as a meme if anything else.

'The Simpsons Did it Again,' But Where's Doge?

The viral pic shows Mr Homer reading a newspaper. What’s caught the internet’s eye was the front-page headline, ‘Funny Dog to Make Life Worthwhile.’ Although it nowhere mentioned Doge, some users on Twitter are convinced that The Simpsons predicted the ongoing Doge craze in Season 8, Episode 14, ‘The Itchy & Scratchy & Poochie Show,’ aired in February 1997.

Will doge reach $1? While that is yet to be seen, with The Simpsons' history of predictions to real-life events, it will sure be interesting to see the future of the meme-based cryptocurrency.

(The above story first appeared on LatestLY on May 09, 2021 01:05 PM IST. For more news and updates on politics, world, sports, entertainment and lifestyle, log on to our website latestly.com).