What Is Dogecoin? Why Is It So Popular? All You Need to Know About the Meme Cryptocurrency That Started as an Internet Parody

Just how the virtual currency bitcoin has surged in value recently, so has Dogecoin. But what is Dogecoin? Why is it so popular? Let us track the history of Dogecoin—the meme cryptocurrency that started as a meme. 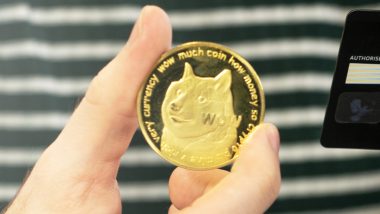 If you are hooked onto social media, you must have often come across tweets, hashtags and more related to ‘dogecoin.’ Just how the virtual currency bitcoin has surged in value recently, so has Dogecoin. Social media users continue to rave over the surge. The Tesla CEO Elon Musk’s tweets may have helped the rise; it is undeniable that the internet is obsessed with cryptocurrency. But if you are just as new to the term, like many others, and a little confused about the doge buzz, you have reached the right place. So, what is Dogecoin? Why is it so popular? Let us track the history of Dogecoin—the meme cryptocurrency that started as a meme.

According to reports, Dogecoin was launched in 2013 as a joke by software engineers Billy Markus and Jackson Palmer. Apparently, it was never meant to be a successful cryptocurrency in the first place. Yes, you read that right! The creation was inspired by a trending dog meme and was traded for a long time as a joke. It takes the name and logo from a Shiba Inu meme that was viral during the time.

Like all cryptocurrencies, Dogecoin is a digital currency that can be bought and sold like an investment and spent like money. However, unlike Bitcoins, whose maximum possible number is fixed at 21 million—a figure that is estimated to be reached by 2040, Dogecoin numbers do not have an upper limit. There are already above 100 billion in existence.

Why Is It So Popular?

Something that started off as a joke is no longer a joke. It has its own niche crowd! Doge also has an ardent supporter of Tesla CEO Elon Musk, who never shied away to share his obsession over the meme cryptocurrency with the world. It so happened that cryptocurrency has emerged as one of the favourites of tech giants, bigwigs across industries and social media influencers. But Musk is the loudest supporter of Dogecoin. His tweets on doge have often sent the cryptocurrency surging.

Not unlike the WallStreetBets group on Reddit behind the GameStop’s rally, Dogecoin enjoys a cult status on the internet. ‘Doge to the moon’ has also soared its value this year. The rise in 2021 has been stunning. Dogecoin can be exchanged for goods and services at platforms where it is accepted.

(The above story first appeared on LatestLY on Apr 18, 2021 03:53 PM IST. For more news and updates on politics, world, sports, entertainment and lifestyle, log on to our website latestly.com).