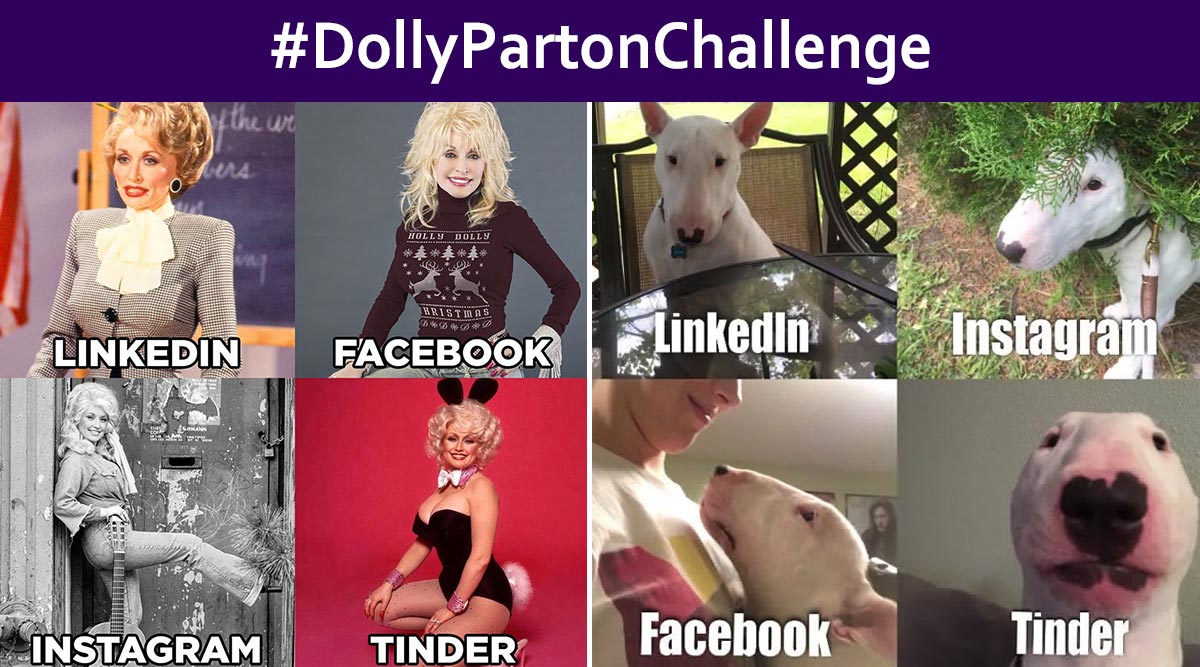 Who would have thought a picture shared by Dolly Parton showcasing her different personalities would become a social media challenge? The 74-year-old legendary singer got everyone showing off their multifaceted personalities in a meme format to show their displays on LinkedIn, Facebook, Instagram and Tinder. Soon it began trending as the #DollyPartonChallenge and many celebrities have joined in too. And now it is not just celebrities alone, but funny pictures of everything including flowers to pets are being shared online. It has become quite a craze and some of the results are funny memes and jokes. Cereal Challenge Goes Viral on TikTok With Teens Eating the Breakfast Food From Each Other’s Mouth (Watch Videos).

We have seen similar meme format before even before, where how one person has different personalities depending on which social media they are on. Dolly Parton shared her multi-faceted personality in four best looks and each photo had name of which social media the look was best suited for. In the caption, she wrote, "Get you a woman who can do it all 😉" And soon it emerged into a social media challenge, with everyone sharing their best looks to describe themselves on LinkedIn, Facebook, Instagram and Tinder. Needless to say, the picture on LinkedIn is a professional one, while one on Tinder shows all sexiness. #10YearChallenge Resurfaces on Social Media With Users Sharing Their Transformation in a Decade (Check Viral Tweets).

Several celebrities started joining in and it began into a viral social media challenge.

People Trying it Out

An Entry From Nature

Get yourself a theme park that can do it all... 😉 #DollyPartonChallenge pic.twitter.com/ZpwKG0KkNB

And it is not just people and celebrity impressions but a lot of pet owners joined along to share cute pictures of their pets.

Such a Cute Pupper

Get you a dog who can do it all. 😉#dollypartonchallenge pic.twitter.com/dfu8actcKV

Penguin's a Part of it Too!

So this challenge has been taken over and in different ways. There are entries of pets to flowers! Celebrities may have started it but it is clearly not limited to them anymore. The entries are getting funnier and can be interpreted as memes themselves.