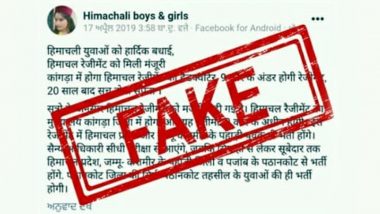 Dismissing the fake claim, a fact check report by Additional Directorate General of Public Interface (ADGPI), the official Twitter handle of the Indian Army, said that there is NO such plan of creating a separate Himachal Regiment in the Indian Army. The tweet added saying that these messages are fake and untrue and urged people to ‘stay away from rumours’. Indian Army Denies Reports of Soldiers Being Detained by China in Ladakh.

There are NO such plan of creating a separate Himachal Regiment in the #IndianArmy.

These Social Media messages are fake and untrue.

“Messages on Social Media are circulating about the creation of a #Himachal #Regiment having headquarters at #Kangra. Request guard against misinformation and #Fake messages", the tweet read. The clarification by the Indian Army came after several social media users showed willingness to join the special regiment which was claimed to be created for the youth of the mountain state.

(The above story first appeared on LatestLY on May 26, 2020 12:48 PM IST. For more news and updates on politics, world, sports, entertainment and lifestyle, log on to our website latestly.com).