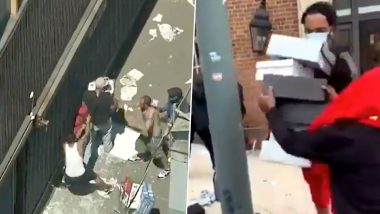 Loot videos of "protestors" breaking into luxury stores like Chanel, Coach, AT&T store, Macy’s, Adidas, Louis Vuitton, Gucci, Nike, Apple etc. and stealing products, after the peaceful protest for George Floyd's death went wrong, are going viral on social media. More and more clips are doing rounds on social media some even show other looters, stealing from the people who are trying to run away after robbing off luxury products. Amid a rattling situation in the United States where the people are carrying out, raging protests over the murder of an African-American man George Floyd by a Caucasian police officer in Minneapolis accused of racist violent attack, these videos create a rather funny sight. With nothing to do with the serious protests that are going on for George Floyd, these vandalists can be seen breaking into the luxury shops and robbing them off of expensive products. Louis Vuitton, Nike to Apple, US Protesters Loot Luxury Stores Amid Growing Tensions over George Floyd's Death (Watch Shocking Videos).

Videos of fights over the looted products like Nike and Adidas shoes, Macy's bags, Louis Vuitton merchandise and other luxury products are going viral and they look nothing like protests but sheer robbery and vandalism. The United States witnessed a cold-blooded murder of a man of African descent and ever since #BlackLivesMatter, #ThisIsAmerica, #Blacks and #BlacksinAmerica are going viral. Some protests have gone out of hand as the public is breathing fire. Scenes are so devastating that some are even comparing it with the Vietnam War protests. Minneapolis Police Station Torched by Angry Demonstrators Amid George Floyd Protest.

However, the protest gone astray is seeing these arbitrary loots and vandalisation of public and private properties. Store of Chanel in Soho, Adidas flagship store in New York’s Manhattan, Coach in Midtown, AT&T store on Michigan Avenue, Macy’s store at Water Tower Place, Chicago, Louis Vuitton store in Portland, and Walgreens on 4th Avenue were some of the attacked luxury stores. Vandalising scenes were also seen at Flight Club, Supreme and Sole Stage on Fairfax Avenue in Los Angeles. Video of people looting Louis Vuitton, Gucci, Nike to Apple stores are going viral online and the fact that the robbers are being robbed as well is making it seem like sheer chaos. Netizens are angered by these videos. Take a look at some of these videos:

This is the scene in Philadelphia

Watching #looters loot a pharmacy in Philadelphia coming out with pill bottles in hand. He reads the labels then just throws them up in the air. #riots2020#philly #phillyriots pic.twitter.com/g21SIb4wwf

Looters in California Fighting Each Other for Merchandise! Watch Video:

This one Is From Rochester NY When a Villa Shoes was Looted. Look at Someone Robbing Off The Robbers:

Stealling is not racial healling,

WATCH THIS: "Justice" for #GeorgeFloyd in Rochester NY when a Villa Shoes was looted. Looters stop cars in traffic to loot the store.

Here's How Nike store on Michigan Avenue Was Ransacked!

Macy’s broken into. People taking off with bags and other merchandise. @cbschicago pic.twitter.com/chMz2Fb8uZ

Reports say that it started with peaceful demonstrations and protests from the Times Square and at the Barclays Center in Brooklyn. However, things soon went out of hand with people vandalising public and private properties. Protestors from Manhattan and Brooklyn could be heard chanting “I can’t breathe” and “anti-violence” along the way.

(The above story first appeared on LatestLY on Jun 01, 2020 05:55 PM IST. For more news and updates on politics, world, sports, entertainment and lifestyle, log on to our website latestly.com).