Godsent! Man Saves Baby Who Strolled out on the Road from a Massive Accident in an Unbelievable Video 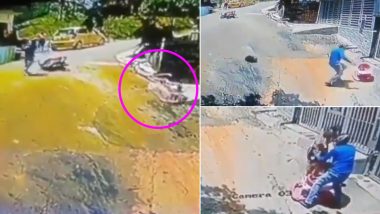 Man Saves a Baby Who Strolled out on the Road (Photo Credits: Twitter)

Saving someone's life is the closest you can come to humanity and hope. A recent video showing a man saving a babies life is taking over social media and it will make you believe in goodness all over again. The viral video captures a near-death experience that will leave you with goosebumps. The man in this video, who almost looks like a delivery guy is seen moving on the road when out of nowhere a baby in its walker/crawler barges in the middle. The man first controls the vehicle to not hit the baby and then uses his presence of mind to leave the bike and run towards the baby who was still strolling and was about to stumble before, a lady who seems to be the mother comes out. The man is being lauded on social media and people cannot get enough of the video  Pets are Lifesavers! 5 Times Videos of Cats and Dogs Saving Human Lives Went Viral.

The mother of the baby later comes out to hold her baby when the man walks along with her. The man is being called a hero online for using his reflexes at the right time while saving the baby's life. Check out the video share by @MPNaveenJindal:

There have been many such miraculous incidents in the past. A few weeks ago a heartwarming video is doing the rounds on the social media which shows a woman risked her life to save a dog who fell through thin ice. The video was shared by an Indian Forest Service Officer Susanta Nanda. Just earlier this year, Florida-based couple, Paul and Leona Jones of Deltona, were saved by their pet cat's meowing.  In July, a video of two dogs saving a baby from a deadly cobra went viral. In the video, you could see two dogs teaming up to kill a snake (cobra) before the serpent could do any harm to a one-year-old baby Skye, who was sleeping in the room where the snake tried to enter, in the Phillippines. Also, another video of a dog protecting a little girl from falling into a river and drowning a few months ago, left the internet emotional. Whoever doesn't believe that dogs are better than people, definitely hasn't seen the video.

(The above story first appeared on LatestLY on Sep 20, 2020 12:49 PM IST. For more news and updates on politics, world, sports, entertainment and lifestyle, log on to our website latestly.com).