When a top chef messed around with a dish so good, Twitterati came cracking down and started trolling him. 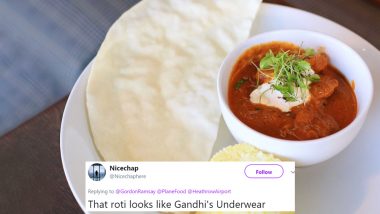 Top chef Gordon Ramsay is known for being a very harsh food critique. His temper and choice of expletives haven't been received kindly and people on social media have criticism style several times. But this time, it was a chance for the internet to take their revenge. It so happened, Ramsay uploaded a picture of a plate of butter chicken he was having at his restaurant on the Heathrow airport. Butter Chicken is popular Indian chicken curry and in fact, a very loved dish by non-veg lovers. The quantity, spice and the overall taste is relished by them but Ramsay's plate looked far from appealing. When a top chef messed around with a dish so good, Twitterati came cracking down and started trolling him. Gordon Ramsay Shocks Twitter with His 'going to Give This Vegan Thing a Try'.

Plane Food is Gordon Ramsay's restaurant which is now also at the Heathrow Airport. Ramsay's way of promoting it and the butter chicken not just missed the mark but clearly failed to impress anyone. The picture had a relatively smaller bowl of butter chicken, along with little rice and South Indian poppadum or an equivalent of naan (type of flat bread). From calling it a starter to looking at its finishing, people on the internet showed his way of criticism back to him. What Does the Number 65 in Chicken 65 Mean?

Is it for Ants?

What is this? A meal for ants?

Or That's a Starter?

This could be better presented

How Ramsay Would Say it!

We Obviously Are Better At Butter Chicken!

I honestly would pay 100/- at my local restaurant and get something better than that 😂😂 That's not even Indian food. 😂 Come here . You'll get 1000 times better butter chicken

A lot of Indians commented that it is clearly not how 'original' butter chicken looks like. When we say butter chicken, we mean a full course meal and the quantity is Ramsay's picture was too disappointing as some called it 'depressing' too. What are your thoughts on Gordon Ramsay's Food Plane's version of this chicken curry dish?

(The above story first appeared on LatestLY on Feb 20, 2019 08:58 PM IST. For more news and updates on politics, world, sports, entertainment and lifestyle, log on to our website latestly.com).