Hardik Pandya, the newly-appointed captain of the Ahmedabad franchise in the Indian Premier League, has danced to Allu Arjun's most popular song Srivalli along with his Pushpa grandmother. 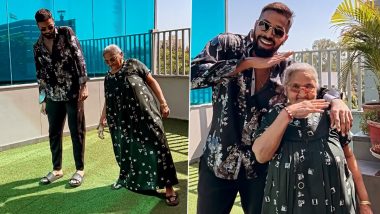 Hardik Pandya, the newly-appointed captain of the Ahmedabad franchise in the Indian Premier League, has danced to Allu Arjun's most popular song Srivalli along with his Pushpa grandmother. A video of Hardik Pandya dancing with his grandmother to the song Srivalli from Allu Arjun's 'Pushpa' was posted through his Instagram handle on Wednesday. David Warner Grooves to Pushpa Song Srivalli; Australian Ace Cricketer Slays in Allu Arjun’s Dance Moves (Watch Video).

Having fun on their terrace, the duo tries to recreate Allu Arjun's signature 'Srivalli' step. Hardik Pandya's grandmother grabs everyone's attention, as she can be seen enjoying the step as much as anyone. Hardik also captions the cute video, as he wrote, "Our very own Pushpa nani", as he tags Allu Arjun. There is no doubt that the fever created by Allu Arjun's 'Pushpa: The Rise' has not only swept the country, but also renowned personalities all around the world. Pushpa The Rise – Part 1 Song Srivalli: Allu Arjun And Rashmika Mandanna’s Romantic Track Will Rule Hearts! (Watch Video).

Hardik Pandya and Nani Dance to the Tune of Srivalli Song

Celebrities from all over the world have been posting videos, as they try to fit into the world of Pushpa, while they try to recreate Allu Arjun's signature steps from the movie. On Tuesday, Australian cricketer David Warner, posted a couple of videos in which he tries to catch up with the ongoing 'Pushpa' mania. Warner also posted a fun video featuring himself in a few iconic scenes from 'Pushpa: The Rise' instead of Allu Arjun.

(The above story first appeared on LatestLY on Jan 26, 2022 04:37 PM IST. For more news and updates on politics, world, sports, entertainment and lifestyle, log on to our website latestly.com).