South Africa, who are playing their third game of the tournament have lost their previous two matches to Bangladesh and England. 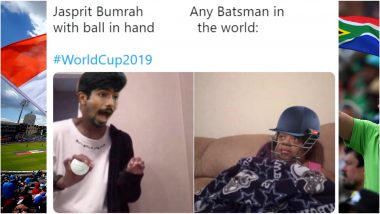 After days of waiting, Team India kicked off their ICC Cricket World Cup 2019 campaign against South Africa on June 5 and what a first half it has been. India has to chase a paltry target of 228 in 50 overs. Led by Virat Kohli, India National Cricket Team has been phenomenal on the field. The Men in Blue were asked to bowl by Proteas skipper Faf du Plessis after winning the toss. Sadly, the decision proved to be fatal with Indian bowling attack led by Jasprit Bumrah wreaked havoc on their batting lineup. While Team India were having a blast on the field, the die-hard Indian cricket fans enjoyed on social media by posting funny memes, jokes and tweets. India fans could not have asked for a better start in ICC’s flagship event. You can catch the live score updates of India vs South Africa, Match 8 of ICC Cricket World Cup 2019 here.

India vs South Africa match is taking place at the Rose Bowl Cricket Ground (Hampshire Bowl) in Southampton. And once again, Indian captain lost the toss. Faf du Plessis decided to bat first, a decision he would be ruing for a while. His openers, Hashim Amla and Quinton de Kock failed to give the side a good start. Indian spearhead Jasprit Bumrah who is playing his debut World Cup match got rid of both openers cheaply. South Africa vs India Cricket Score 8th ODI Match in ICC Cricket World Cup 2019.

However, it was Yuzvendra Chahal who was the pick of the bowler as he rattled through South Africa’s middle-order. South Africa managed to cross double hundred mark thanks to valuable contribution from lower-order batsmen Chris Morris, Andile Phehlukwayo and Kagiso Rabada. Nevertheless, the total of 227/9 does not look threatening and that’s what has got fans in India all cheered up. Take a look at the funniest memes and jokes from India vs South Africa at the end of first innings. India vs South Africa Mid-Innings Report: Yuzvendra Chahal, Jasprit Bumrah Lead CWC19 ODI Match Show as IND Restrict SA to 227/9.

Laughing So Hard At It

Jasprit Bumrah Any Batsman in

From KulCha to BC :D

Reporter : how are you going to deal with South African Top order?

South Africa, who are playing their third game of the tournament have lost their previous two matches to Bangladesh and England. They need to win the game to stay afloat in the ICC Cricket World Cup 2019. Brief Scores: South Africa: 227/9 (Morris 42, Chahal 4/51) vs India.

(The above story first appeared on LatestLY on Jun 05, 2019 07:11 PM IST. For more news and updates on politics, world, sports, entertainment and lifestyle, log on to our website latestly.com).