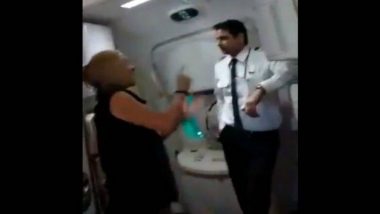 In a shocking turn of events, the Irish woman who hogged the negative limelight for hurling abuses, spitting at Air India staff last year, has been found dead at her home in East Sussex in England. According to reports, it looks like she has apparently committed suicide.  Woman Abuses Air India Crew After Being Denied Alcohol; Watch Video.

Simone Burns, 50, had been sentenced to six months in jail in April for her rant and spitting at the flight attendants. She was released from prison two weeks ago. In November last year, the drunk woman's rant began, when the cabin crew complained to the commander that she was too drunk. The commander then instructed his crew not to serve her more liquor, which set her off. Videos of her expletive-laden tirade went viral on the internet.

In a video, reportedly shot by a crew member, the woman was heard saying, "You are the captain, aren't you? You treat business class passengers like this? I work for all you f**king people... The f***ing Rohingyas, the f***ing people of all Asia, for you, an international criminal lawyer. Don't get any money for it by the way. But you won't give me a f***ing glass of wine, is that correct?"

Air India had filed an FIR against the passenger and she was taken into custody on landing at London's Heathrow airport.

(The above story first appeared on LatestLY on Jul 04, 2019 11:12 AM IST. For more news and updates on politics, world, sports, entertainment and lifestyle, log on to our website latestly.com).