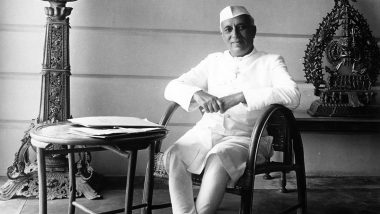 New Delhi, November 14: Celebrated as Children's Day, the birth anniversary of Jawaharlal Nehru is intended to evoke admiration for India's first Prime Minister - Jawaharlal Nehru - for the love he exhibited during his lifetime for the minors. The day is also aimed at commemorating his achievement as a freedom fighter, as the first PM and a global leader who led the non-aligned movement. Far from revering Nehru's attainments, Twitter trolls in India strove hard to paint a derogatory image of the late leader.

Taking the discourse on the social media site to another low, the micro-blogging propagandists trended #ठरकी_दिवस, which roughly translates to "Pervert Day" since the early hours of Thursday. The trolls shared several images, whose authenticity and context have been challenged, to malign Nehru on his 130th birth anniversary. Watch: Why Nehru's Birth Anniversary is Celebrated as Children's Day?

Along with his "photoshopped images", the character-assassination continued with narration of malafide history, questioning of his ancestry and projecting him as "anti-Hindu".

Below are Some Derogatory Tweets

#ठरकी_दिवस such a shame to those who are supporting this.

Really a shitty trend, so sad to see people sharing fake images and sharing half truth,every person has positives and negatives, but abusing the first prime minister of our country who laid the foundation for a modern India in such a bad way,not fair right wingers. #ठरकी_दिवस

Nehru, who was once credited to have laid the foundation for India's momentous growth among other third-world nations, has lately emerged as one of the most hated figures in Indian politics. Over the last decade, Nehru's legacy has been one of the worst victims of India's post-truth propagandism. Apart from assassinating his character through unauthenticated quotes and morphed images, the anti-Nehru camp has put the blame solely on him for the partition of India and the insurgency in Kashmir.

(The above story first appeared on LatestLY on Nov 14, 2019 05:03 PM IST. For more news and updates on politics, world, sports, entertainment and lifestyle, log on to our website latestly.com).