#Justice4Mohamud is currently trending on Twitter. Mohamud had been arrested on January 8, and was released without charge, the next morning. Witnesses noted that he had been severely beaten, with blood on his clothes and bruises all over his body. 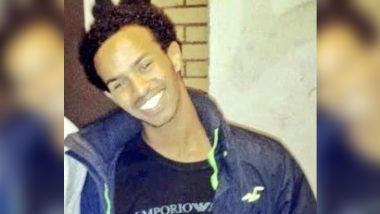 A horrific incident came forward, which once again highlights police brutality. A 24-year-old black man died following time spent in police custody. Identified as Mohamud Mohammed Hassan, he was arrested and taken to Cardiff Bay Police station in Wales, UK. His ‘unexplained death’ has drawn suspicious from the family members that the cops assaulted him, while he was in custody. It sparked an investigation and supporters are calling for answers. #Justice4Mohamud is currently trending on Twitter, calling back the #BlackLivesMatter viral hashtag, as people highlight police brutality. Mohamud had been arrested on January 8, and was released without charge, the next morning. Witnesses noted that he had been severely beaten, with blood on his clothes and bruises all over his body.

Mohamud’s death sparked debates on social media, following police brutality. His death has been investigated by the South Wales Police, who described the death as ‘unexplained and sudden,’ in its official statement on Twitter. According to reports, Mohamud was arrested at his home in Newport Road in the Roath area of the city and was taken to Cardiff Bay police stations on suspicion of ‘breach of peace’. But he was released the next day without any charges. “He was released on Saturday morning with lots of wounds on his body and lots of bruises. He didn't have these wounds when he was arrested and when he came out of Cardiff Bay police station, he had them,” his aunt, Zainab Hassan was quoted saying in a BBC report. Batman Arrives at US Capitol Hill During Unrest? Know Truth About The Viral Video From BLM Protests.

His death sparked a debate online, with people demanding justice for Mohamud. Hilary Brown, CEO of Virgo Consultancy, who is representing the family, noted that the family is seeking answers to many questions they have. Social media users demand real answers that Mohamud’s family seek.

This is Mohamud Mohammed Hassan arrested by @SWPCardiff died after his release, it’s clear he suffered a horrendous beating. The family will be launching a justice campaign in due course. This shit is relentless. #Cardiff #BlackLivesMatter #Justice4Mohamud pic.twitter.com/Sn1v45UrYQ

Remember, this is what it is about. A life taken unjustly, horribly, and far too early. #justice4mohamud ✊🏿 pic.twitter.com/XJBe6owwZv

We are deeply concerned about the news breaking today about the death of a young black man from Cardiff. We urge @SWPolice to immediately explain what exactly happened to Mohamud and to conduct an independent investigation to reassure his family and community #Justice4Mohamud pic.twitter.com/1GiXgTOMcv

May you rest in peace bro💔

Breaks my heart that he was about to become a father💔😭

We are investigating the sudden and unexplained death of 24-year-old Mohamud Mohammed Hassan on Saturday, January 9.

Police were called by the Welsh Ambulance Service to a multi-occupancy property on Newport Road, Roath, Cardiff, shortly after 10.30pm.

Amid the online campaign, the South Wales Police noted that it had so far found no evidence of excessive force or misconducts, but has referred itself to the complaints watchdog. His death has been referred to the Independent Office for Police Conduct (IOPC, a police watchdog organization that oversees cases of death following police contact.

(The above story first appeared on LatestLY on Jan 12, 2021 08:16 PM IST. For more news and updates on politics, world, sports, entertainment and lifestyle, log on to our website latestly.com).