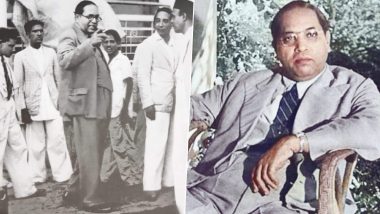 The nation honours the Father of Indian Constitution, Dr Bhimrao Ramji Ambedkar. A well-known statesman who fought for the rights of the Dalits and other socially backward classes, Dr BR Ambedkar breathed his last on December 6, 1956. A country lost its great leader on the day. Every year, to honour him on his death anniversary, the nation observes Mahaparinirvan Diwas. At Chaityabhoomi in Mumbai, Maharashtra, people gather in huge number to pay their tributes on his 64th death anniversary. Because of the pandemic, live streaming is arranged so that everyone can honour Babasaheb Ambedkar from home. Followers have also taken to Twitter to share Mahaparinirvan Diwas or Mahaparinirvan Divas, Mahaparinirvan Din 2020 messages. Netizens honour Dr Bhimrao Ambedkar by sharing quotes and photos of Babasaheb Ambedkar on his 64th death anniversary.

Dr BR Amedbkar was the first person to hold a title befitting his works and efforts for the country, the Minister of Law & Justice. It was a time when the country needed change, and it was only possible with the guidance of some of the great leaders. He was one of them. Babasaheb’s philosophy, believes, strong thoughts, desire to make India a better country to live in, can never be forgotten. His contribution to the Indian constitution and the fight for equal rights will always be honoured and remembered. To mark the 64th death anniversary of Dr BR Ambedkar, here we bring you the tweets, Mahaparinirvan Diwas 2020 messages, some old photos of Babasaheb Ambedkar, his powerful quotes and more that netizens are sharing on Twitter, remembering him.

Remembering the father of modern India Baba Sahab Ambedkar on his Mahaparinirvan diwas🙏🏻 Forever in our hearts ❤️ pic.twitter.com/oqqvKLQwOv

Blessed are the people whose life Babasaheb has touched &emancipated. Proud to say I am one of them. My Homage to Babasaheb on his 64th Mahaparinirvan day.#Jaibhim 🙏 #mahaparinirvandiwas #AmbedkarDeathAnniversary pic.twitter.com/61wBVdjAIG

People Gathered at Chaityabhoomi in Dadar To Pay Their Tributes

May the spirit of Self Confidence and Fight against oppression be with us on this Mahaparinirvan Day and always .. Let us remember Dr. Ambedkar on Mahaparinirvan Day & alwaysWe are because He was..!#Revolutionary_Ambedkar #mahaparinirvandiwas #बाबासाहेब_अमर_रहे pic.twitter.com/r7ib9xhAy6

Inspiring millions of people like me to live with dignity, to fight for their rights, to give top priority to the country and to treat people as human beings,

Humble Tributes to Baba Saheb Ambedkar on his Death Anniversary.

No book in India is supreme than the book he has given us, The Constitution!

Dr BR Amedbkar was a great leader, and his thoughts left a significant mark in the society. He fought for the country, when she needed freedom and he worked for the nation, when she needed an influential leader like him. We honour him on his 64th death anniversary and this Mahaparinirvan Din, let us all promise to follow his teachings to eradicate any injustices in the society.

(The above story first appeared on LatestLY on Dec 06, 2020 09:40 AM IST. For more news and updates on politics, world, sports, entertainment and lifestyle, log on to our website latestly.com).