Man Clings to a Building on Fire, Firefighters Rescue Him on a Crane in Rome (Watch Dangerous Video)

A terrible fire ripped through a building in Rome on Wednesday forcing a young man to cling on to the cornice of the building. 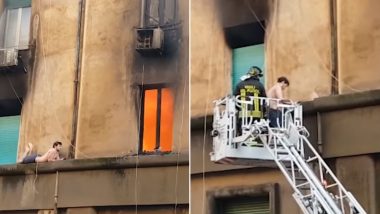 A terrible fire ripped through a building in Rome on Wednesday forcing a young man to cling on to the cornice of the building. Video of the man lying to on the edge of the loft a burning apartment has gone viral on social media. In the clip, he can be seen on the loft quite close to the fire billowing out of the room. Meanwhile, firefighters tried to douse the fire to reach the man, however, they couldn't. Eventually, rescuers brought him down from the ledge using a crane. Woman Calls Firefighters to Rescue 'Huge Monitor Lizard,' Turns Out To Be a Small Gecko, View Pic!

Large crowds gathered outside the building as firefighters tried to bring the fire under control. The man has been quite fortunate enough to escape uninjured from such a terrible fire. Also by balancing himself on the ledge, although dangerously, he saved himself until the firefighters arrived. House Full of Snakes Catches Fire in Arizona! Phoenix Fire Department Rescues Over 100 Reptiles and Other Animals (Watch Pics and Video)

It is not know how the fire broke out in the building. The video shows smoke billowing out of the adjoining two rooms of the building also. Fire seems to have gripped one of the apartments completely. During the rescue operations, one of the firefighters arrived at the balcony of the floor which was gripped by fire. He can be seen speaking to the rescuers standing below and giving them directions. Following which spray water towards the window, but it doesn't help. Eventually, a crane from the fire engine took the man to safety.

(The above story first appeared on LatestLY on May 24, 2019 01:31 PM IST. For more news and updates on politics, world, sports, entertainment and lifestyle, log on to our website latestly.com).