Mia Khalifa Shares NSFW Tweet ‘My Tits Are Too Nice To Look for Parking,’ Racy Message on Twitter Goes Viral!

Anyone who knows, follows or is a fan of ex-pornstar, Mia Khalifa , knows that the Pornhub.com legend has a super sexy sense of humour. She is known for racy yet humorous tweets, Instagram posts and reels. Her latest tweet is making people laugh as well as leaving them smitten. 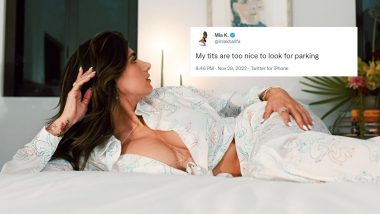 My tits are too nice to look for parking

Mia Khalifa had also shared some of the sexiest pics of herself on the Arcadia magazine cover for the first time leaving her fans with dropped jaws.  The most recent cover of Arcadia magazine captures the eXXX-porn icon, Mia Khalifa flawlessly who expressed her joy at having her face appear on a magazine cover for the first time. Just recently, on Emily Ratajkowski's podcast High Lows, the 29-year-old former porn star discussed her experience leaving the sex industry, the effects, and advice for other young people. At the age of 21 in 2014, Khalifa first attracted attention in the adult film industry. Khalifa shot to stardom as soon as she entered the industry thanks to a contentious hijab-related sex scene she performed. She quit her job only three months into her profession. Khalifa distanced herself from pornography, yet her fame persisted. Khalifa currently only publishes "suggestive" stuff on OnlyFans in addition to her other professions, but she does provide some tips for people aspiring to be like her.

(The above story first appeared on LatestLY on Dec 01, 2022 03:46 PM IST. For more news and updates on politics, world, sports, entertainment and lifestyle, log on to our website latestly.com).