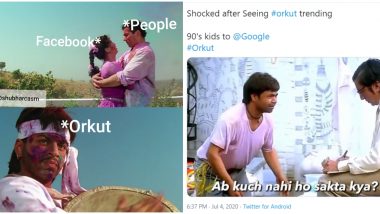 Remember Orkut? If you are a 90s kid then you'd remember the struggle of going to the cyber cafes (oh remember these, too?) just so you could use Orkut for a few hours. It was a platform that introduced social media network, way before Facebook came in and became popular. One tweet about this old social media network has now prompted people to relieve their nostalgia of using Orkut. Funny memes and joke reactions have got #Orkut on the top trends of Twitter today. If you miss the good old days, then you should look at these memes. Every 90s Kid's Wait Is Over! Ash Ketchum Becomes Pokemon Master After 22 Years, Finally.

For those of the 2000s generation, completely unaware of this, Orkut was a social networking website owned and operated by Google. It was very popular during the years 2008-2010 before Facebook took over. A user required an invitation to make their account over Orkut, no less than a privilege of interacting with people online. Now, people have even switched on from Facebook to widely using Snapchat, Instagram, Twitter, Telegram and so on. But it took a single tweet asking if anyone remembers Orkut and Desi netizens are divulging in nostalgia. Using the popular meme formats, Orkut funny jokes are trending online.

Check Some Memes and Jokes on Orkut:

For an hour. It was my first social media account on internet. After seeing Orkut trending , my emotions are like :- pic.twitter.com/gCziOFRX9a

When Facebook was launched after Orkut and people started ignoring #orkut slowly.

If you have used Orkut back then, even you'd hope if it could come back! But that doesn't look like happening anytime soon. So share these memes and jokes with your 'Orkut friends' and relive the good old days.

(The above story first appeared on LatestLY on Jul 04, 2020 08:05 PM IST. For more news and updates on politics, world, sports, entertainment and lifestyle, log on to our website latestly.com).