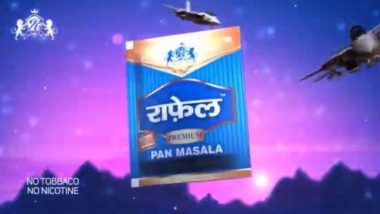 Lucknow, July 30: On Thursday, as five Rafale fighter jets touched down at the Ambala airbase, Twitterati were also talking about the pan masala brand by the same name 'Rafale'. Interesting a short video was also going viral, which features an animated version of the aircraft.

Advertising watchdog ASCI enquired if it was an official advertisement by the brand because it didn't have the statutory warning as mandated by the Food Safety and Standards Authority of India (FSSAI). Rafale Pan Masala Lands in Indian Market Even as Nation Awaits Arrival of 1st Fighter Jet From France, Creates Buzz on Twitter.

Well, this does not have the statutory warning statement as mandated by @fssaiindia Is this an official advertisement ?

Thanks to @RahulGandhi their target audience already knows about the pan masala 😄#Rafale #PanMasala #AmbushBranding 😂😂 pic.twitter.com/Rkleqi3tdB

However, it is interesting to note that the brand made some noise around 9 months back as well. According to a previous ANI report, Qazi Ilham, a member of the graphic designing team at Magicreel, the company which produced the commercial, said that it was for an Uttar Pradesh based client.

(The above story first appeared on LatestLY on Jul 30, 2020 03:35 PM IST. For more news and updates on politics, world, sports, entertainment and lifestyle, log on to our website latestly.com).