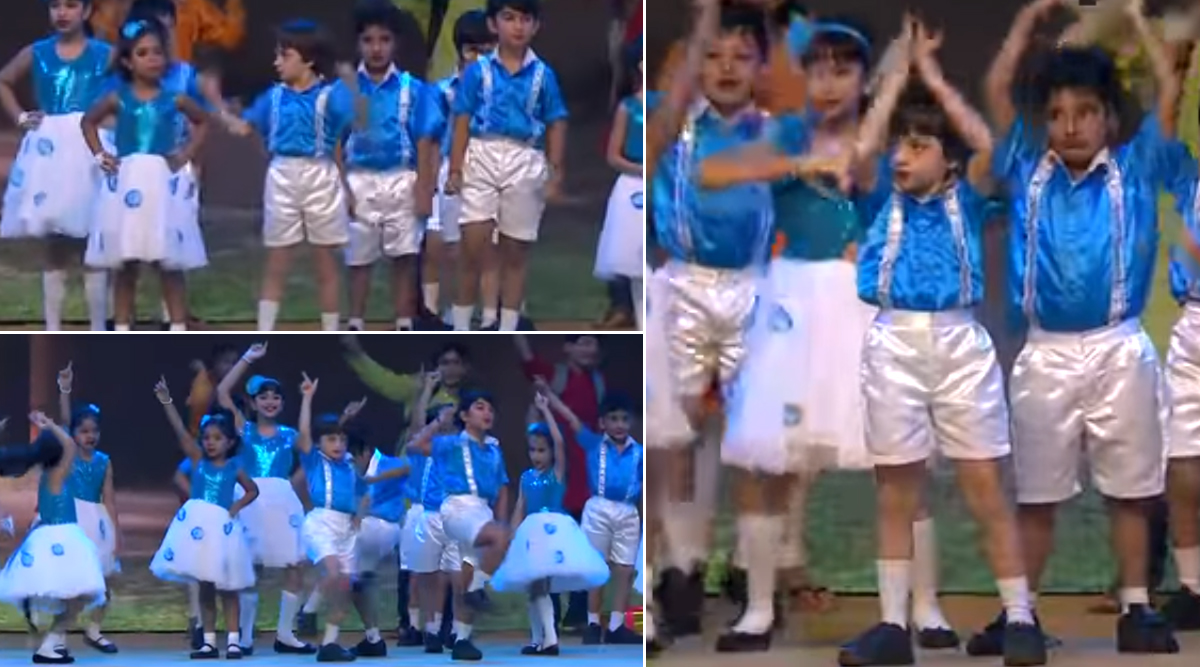 Shah Rukh Khan's youngest son AbRam Khan was probably the one who started such a fan frenzy for babies of the stars. The little kid's appearances for the media became lesser and lesser over the time. But the fandom he conducts has not lessened a bit over the years. So, we know that when we are going to show you a video of AbRam Khan dancing at his annual function, you are going to watch it. Well, a few days ago Dhirubhai Ambani school in Mumbai celebrated its annual day. Amongst the kids who performed on stage was Abram. And sitting in the audience was Shah Rukh enjoying the show. The entire annual function was streamed live on YouTube. That's a new. Aaradhya Bachchan Recites A Poem On Girl Child At Her School Function While Abhishek Bachchan And Shah Rukh Khan Turn Paparazzi (Watch Video).

In the video, after one and a half hour mark, AbRam comes on stage with his group. They dance together, with AbRam getting a few moments to shine. The group of students danced on Imagine Dragon's On Top Of The World. The choir was singing a perfect cover of the song, it seems. Netizens Cannot Stop Gushing about Aishwarya Rai Bachchan’s Daughter Aaradhya and Shah Rukh Khan’s Son AbRam after Pics from Their School’s Annual Day Function Hit Online.

Check Out The Video Of AbRam Khan's Annual Function Here:

Apart from this video, many versions of the performance are going viral on social media, thanks to fans with editing apps on their phones. In one such edited version, AbRam is dancing to the tunes of Mere Naam Tu from Zero.

Check Out One Such Video Here:

[Video]: Proud Parents enjoying their child performance.❤❤❤@iamsrk and @gaurikhan cheering for #AbRam during his Annual Day performance in school..😍❤ pic.twitter.com/IiHXNm4Nbs

And let us take a moment to talk about Shah Rukh Khan and his sudden disinterest in doing a movie. We get it, Zero did not work at the box office, but a new movie should have been announced by now. The fandom of the actor is patiently waiting for him to talk about his next project. We hope it happens soon and he springs back into action.