Interestingly, in one of the scenes, a policeman is seen asking Mukesh Khanna's Shaktimaan character if he has a birth certificate or a school leaving certificate to prove that he's a citizen of India. 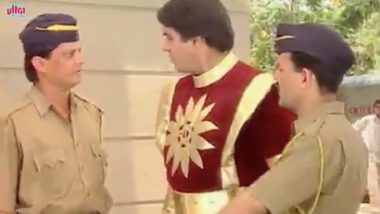 For the past month, there have been nationwide protests taking place against CAA- Citizenship Amendment Act, NRC and NPR. Not just citizens and students but several Bollywood personalities too took part in the protests and have been voicing their opinion on the same. Recently, a video of the popular Indian series from 90s, Shaktimaan went viral because of its content having a connection to the recent citizenship act. Interestingly, in one of the scenes, a policeman is seen asking Mukesh Khanna's Shaktimaan character if he has a birth certificate or a school leaving certificate to prove that he's a citizen of India. Amitabh Bachchan, Sachin Tendulkar's Old 'I Am Indian' Video Goes Viral, Twitterati Say We Need a Newer Version Post Their Silence on JNU Attack.

Considering all the talk around the CAA and the importance of documents beyond the birth certificate and so on, this clip is now going viral on Twitter. Actress Swara Bhasker who has been vocally criticising act also reshared this tweet consisting of the Shaktimaan video. Not long ago, Bhasker was trolled on Twitter for her viral video where she was seen saying that she doesn't have documents which were later questioned by Twitterati with pictures of her abroad trips asking if she travelled without a passport for the same. Check Out how Twitter reacted to this clip.Amidst Anti-CAA Protests, This Old Beautiful Song Featuring Anil Kapoor, Aamir Khan, Salman Khan, Rajinikanth and a Young Ranbir Kapoor, Tiger Shroff, Sonam Kapoor Is Going Viral (Watch Video).

Check Out the Shaktimaan Clip Here:

Time to find out new superhero in India because shaktiman to gaya 😥😥😥 pic.twitter.com/NyEMnRA2qO

In the wake of the CAA issue and protests, several old videos are now being reshared because of their different interpretations today. Considering not many A-list celebrities such as Amitabh Bachchan and even sports personalities have spoken about the ongoing issue, netizens recently also began sharing an old 'I Am Indian' video featuring these celebs, asking them to speak up now.

(The above story first appeared on LatestLY on Jan 13, 2020 10:28 AM IST. For more news and updates on politics, world, sports, entertainment and lifestyle, log on to our website latestly.com).