Solar Eclipse 2020 Funny Memes & Jokes Go Viral With Desi Netizens Telling What Would Happen if Their Mothers Caught Them Eating During Surya Grahan! 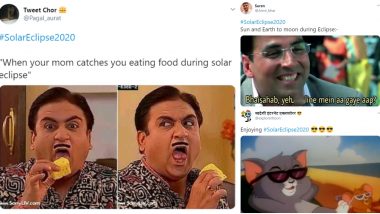 Solar Eclipse of June 21, 2020, is a rare one. It takes place on the day of the summer solstice, the longest day of the year. However, what remains common is our desi moms’ never-ending list of dos and don’ts ahead of the celestial event’s occurrence. One most common thing to avoid doing during the solar eclipse or Surya Grahan is eating. Yep, mythological scriptures, as well as the medical science, backs the theory of avoiding food during Surya Grahan, though it remains a debatable topic. Nevertheless, parents and elders remain extra cautious about it and this particular situation has become fodder for memes online. Ahead of June 21 Annular Solar Eclipse 2020, funny memes and jokes are going crazy viral with the focus being mother’s reaction to you eating during Surya Grahan!

The Annular Solar Eclipse will occur on June 21, 2020. Let us quickly tell you a bit about this astronomical phenomenon before we jump into the pool of memes. A solar eclipse occurs when the Moon passes between Earth and the Sun, thereby totally or partly obscuring the image of the Sun for a viewer on Earth. Now, an annular solar eclipse occurs when the Moon's apparent diameter is smaller than the Sun's, blocking most of the Sun's light and causing the Sun to look like an annulus (ring). An annular eclipse appears as a partial eclipse over a region of the Earth thousands of kilometres wide. Now that you have a fair idea about the celestial event, you got to check out the reactions over its occurrence. Annular Solar Eclipse 2020 Free Live Streaming Online & Surya Grahan Timings in IST: Where and How to Watch the ‘Ring of Fire’ on June 21 As per India Time.

As we mentioned above, eating during Surya Grahan is a big NO-NO! There are several holy scriptures and mythology wherein one advises to not consume food during the solar eclipse. In fact, according to the Skanda Purana, even those who serve food during this period suffer from bad health afterwards. As for the medical science, they back up the no-food-during-surya-grahan theory stating there are some harmful bacteria that accumulate during this phase as there’s no sunlight to kill it and hence, should be avoided. And just in case you are still not convinced, go take a look at these Solar Eclipse 2020 funny memes and jokes, you will be fully convinced.

"When your mom catches you eating food during solar eclipse" pic.twitter.com/FC9BR8JoMd

My mom tells you that during solar eclipse you can't eat , drink , sleep or go out

Me who wakes daily at afternoon 3 😅 pic.twitter.com/7MSTbsBlUf

People rumouring about Solar eclipse between 10:11-1:45

Le me who wakes up at 3PM: pic.twitter.com/lqmav14CDX

4. Desi Mommy Be Angry If She Catches You Eating During Surya Grahan

When u are eating smthing and mom catches uhh ! pic.twitter.com/NLreda1yNz

Sun and Earth to moon during Eclipse:- pic.twitter.com/qat1SwIjOz

According to Indian mythology : pic.twitter.com/zjSVfJEPyj

For India (also Oman), it is going to be the second annular eclipse 6 months after the December 2019 eclipse. The country will have to wait until October 25, 2022, to see such ‘Ring of Fire’ again. According to Nehru Planetarium, Bhuj will be the first city in India where the solar eclipse will be visible at 9.58 AM. The eclipse will end four hours later at 2.29 PM. Viewing a solar eclipse with a naked eye directly will have adverse effects including permanent damage to the retina, therefore, one must view it cautiously via special goggles.

(The above story first appeared on LatestLY on Jun 21, 2020 12:08 AM IST. For more news and updates on politics, world, sports, entertainment and lifestyle, log on to our website latestly.com).