Tiger Shroff Has a Twin? Lookalike Has an Uncanny Resemblance (View Pics)

The young boy looks like Tiger on so many levels - his hair, facial features and even his physique match to great extent with the actor. 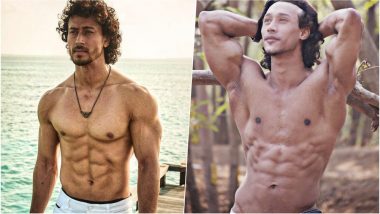 Celebrity look alikes are nothing new. We have witnessed Priyanka Chopra's doppelganger and recently Rihanna's lookalike was spotted in Punjab. And now, Baaghi actor Tiger Shroff who is known for his fitness, sculpted body and extraordinary dancing skills has got a lookalike in Assam. Pictures of David Saharia from Assam has been going viral and has become a hot topic of discussion due to his uncanny resemblance to Tiger Shroff. Don't believe us? Below are pictures for proof.

While the Student of Year 2 actor Tiger has shorter hair now, David looks like him from the movie Baaghi. The young boy looks like Tiger on so many levels - his hair, facial features and even his physique match to great extent with the actor. He too is a fitness enthusiast and apparently keen in body building.

D Meanin of LIFe is not simply To exist, To Survive. But to Move Ahead , To Go Up, To CONQUER..  Being Inspiration #B Legend #Nva Giv up

With an interview with IBT, he said it was exciting for him to be compared with Tiger, but he now wants to make his own name. He said, "Initially, it was really exciting because every one was appreciating for my looks and I felt really good. Even now I feel good but they just know me by his name not mine. Feel bad about it sometimes, but it's okay. I take it as a positive thing. Currently, I am working in Assamese film industry, so that I can make my own name and people would know exactly who I am." We hope that Assam's 'local Tiger Shroff' makes a huge name in the Assamese industry and soon enters Bollywood. Let us know in comments what do you think about David and Tiger's resemblance.

(The above story first appeared on LatestLY on Jul 26, 2018 04:20 PM IST. For more news and updates on politics, world, sports, entertainment and lifestyle, log on to our website latestly.com).