Vegan 'Fried Chicken' Looking Like 'Cabbage' Instead of Meat Has Annoyed Meat-Lovers, Video of Vegan Dish is Going Viral With Angry Reactions

A small snippet of a fried chicken which is actually made up of soy protein has been shared on Twitter and the meat-lovers are fuming. Although it is soy it very much looks like cabbage! So imagine eating it thinking as chicken and it turning out to be cabbage, that's sheer disappointment if you absolutely do not like cabbage too. 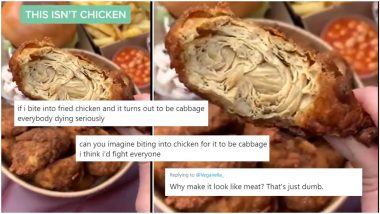 Do you love meat, like a die-hard lover who can gorge on it regularly? Then you probably do not agree with vegan recipes or the concept at all. Veganism is a  principle that excludes all forms of cruelty to, animals for food, clothing or any other purpose. And it is emerging as a food lifestyle among many. Now a video of a vegan 'fried chicken' has upset food lovers, especially the meat-loving foodies. A small snippet of a fried chicken which is actually made up of soy protein has been shared on Twitter and the meat-lovers are fuming. Although it is soy it very much looks like cabbage! So imagine eating it thinking as chicken and it turning out to be cabbage, that's sheer disappointment if you absolutely do not like cabbage or soy either. Something similar is happening to this video clip as netizens dish out angry reactions to this vegan chicken. Woman Makes Maggi With Milk Instead of Water! Twitter is Disgusted With the Recipe Video (Check Viral Tweet).

Twitter user @tllvegan shared a 10-second TikTok clip of fried chicken, only it is not chicken but veggies. But it looks exactly like fried chicken until you take a closer look. It is apparently from a vegan delivery joint called Chickenish in London. The snippet was shared by another user and it garnerned close to 2 million views as non-vegetarians fume at this concept of making vegan food look like chicken in the first place. The video has gone viral and the user confirmed that it is not cabbage, but soy protein. It reminds us of one time when KFC sold chicken burger instead of vegan burger and had to apologise to their customers.

It kicked off on my TikTok today. There’s a *lot* of people crying themselves to sleep tonight over this vegan chicken 😂 pic.twitter.com/omcAbOGqI1

This is gonna upset some people 🤯 #vegan #govegan #plantbased pic.twitter.com/Zv9BpB4I1m

The video has 10,000 likes and 9,000 retweets but not all reactions are in favour of the idea. Check some reactions here:

Why are vegans obsessed with making vegan meals look like meat? It seems counter productive

Dumb Idea for The Looks

Why make it look like meat? That's just dumb.

Could you imagine the rage in your heart after biting into a chicken wing that turns out to be cabbage? https://t.co/KD2JWjlw3w

can you imagine biting into chicken for it to be cabbage i think i’d fight everyone https://t.co/FxLIzDcGlA

If I bite into chicken and find cabbage, someone is gonna die https://t.co/9jSZKMgnN0

You know how mad I would be biting into some fried cabbage thinking it’s chicken https://t.co/fYpHPEpBlm

So many meat-lovers seemed to be upset with the whole idea of making the vegan food look like non-veg food. While many others enquired about the recipe and mentioned they would like to try it at home. What do you think? Well, if you are a meat-lover then we already know your opinion.

(The above story first appeared on LatestLY on Nov 09, 2020 07:30 PM IST. For more news and updates on politics, world, sports, entertainment and lifestyle, log on to our website latestly.com).