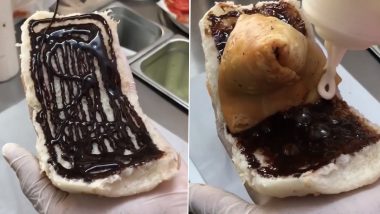 Samosa lovers will swear their love by green spicy chutney and sweet red chutney as a perfect combination. But samosa with chocolate sauce on a pav? That seems unappetising for sure! But a place has been serving the same, apparently a filling that replaces aloo with chocolate fudge too! Why, you ask? You are not the only one. A video of chocolate samosa pav has been shared online and people are losing it. The exact location of where this samosa is served is not known but people on social media are clearly not impressed. Is Ice Cream Pav Gujarat's Answer to Mumbai's Vada Pav? Video of This Weird Food Combination is Going Viral As Twitterati Wonder 'WHY GOD WHY?'

The original video belongs to food blogger Ashish Shrivastav (foodie_on_enfield). He mentions in the comments that the filling was chocolate fudge! The video was shared on Twitter and people are cannot digest even looking at it. Well if you love look at it first, you are going to assume it has the traditional spicy potato filling and to mix it with chocolate sauce is a mixture of flavours we cannot even imagine. Probably it works with the inside also being chocolate mixture. People have been experimental with Maggi noodles again and again but we don't know why some went after samosa too!

People have commented on the post their displeasure at this weird food combination. The same video has found its way on Twitter as well.

People have called it blasphemous and want to unsee this too. Someone just wrote, "Cancel this place." Every samosa lover would be horribly cursing after what they see of their favourite snack. This reminds us of another such samosa combination that gave people nightmares. The samosa had a filling of Oreo Ice Cream! People called it a nightmare. We wonder, who are these highly experimental folks who love indulging in these weirdest food combinations.

(The above story first appeared on LatestLY on Sep 21, 2020 03:29 PM IST. For more news and updates on politics, world, sports, entertainment and lifestyle, log on to our website latestly.com).