Wilbur, the Sausage Dog Reunites With Owner After He Was Lost in Raging NSW Fires (View Pic and Video) 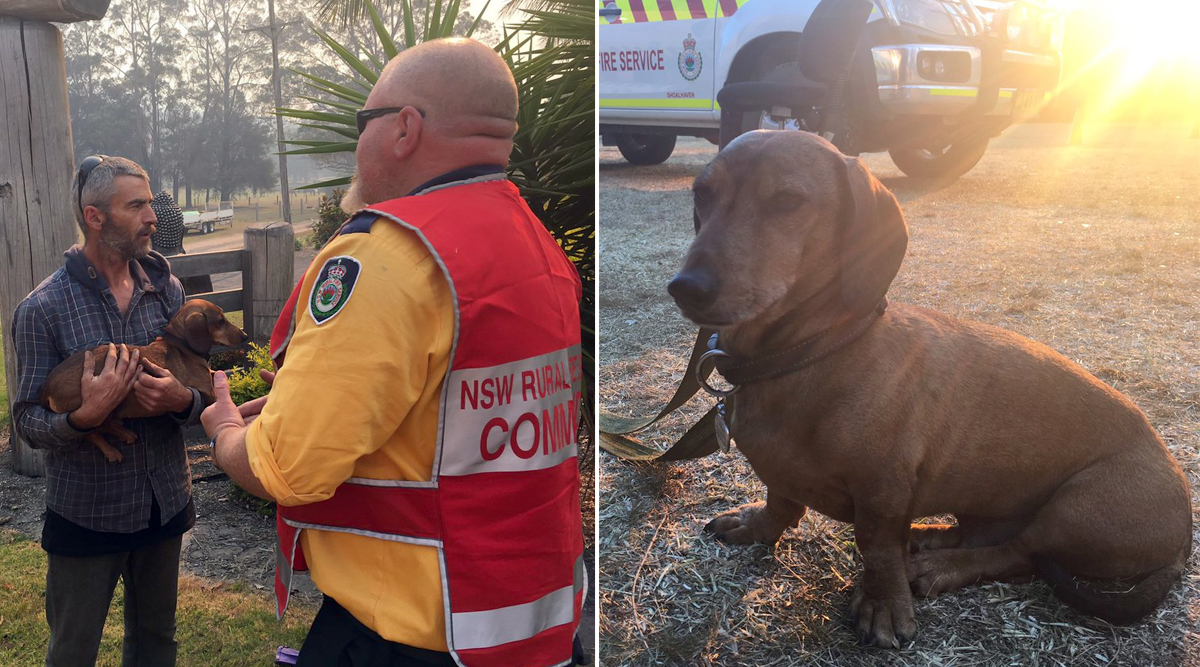 The Currowan fire in New South Wales, Australia has reportedly burnt more than 47,000 hectares. Many properties have been impacted and one home has been lost near the inland part of the fire around the Clyde River. Amidst all the chaos, a pooch was lost as a raging bushfire closed in around him. The crews of the Rural Fire Service (RFS) battling the NSW south coast fires found him running down the fire all alone. The firefighters were quick to spot the sausage dog, named Wilbur, and picked him up outside Turmeil in the Shoalhaven area. The crew contacted the pooch’s owner, and the pair were reunited the following day. The pictures and video of Wilbur and his emotional reunion with the owner have been uploaded on social media. Dog Owner Breaks Down After Being Reunited With Long-Lost Pet.

Fire crews are working round the clock to rescue and evacuate as much as they can. Bracing the severe conditions, the RFS crew saw Wilbur running down the trail with the fire burning on either side of him. One of the members picked him up and took the pooch to their base reportedly at Burrill Lake, north of the fires. The dog was found yesterday, December 4, 2019. The RFS contacted Wilbur’s owners and today morning, December 5, 2019; he was reunited with his family. However, the owner, Paul said Wilbur’s brother Olly, a 10-year-old beagle who ran off the property during the same hour yesterday, still could not be found. The crews are looking for him. Dog Starts Fire at Home in England Town by Turning on Microwave!

This is Wilbur the sausage dog. @NSWRFS crews found him running down a fire trail near Termeil in the middle of the night as fire burned either side of him. Crews are now trying to find his owner. @9NewsSyd #9news pic.twitter.com/qBffT4bnp0

Wilbur the sausage dog was saved by firefighters who found him stranded, surrounded by bushfire in Termeil. Fire crews have now contacted his family and they will soon be happily reunited. #9News pic.twitter.com/81iNE5jGM3

REUNITED! Wilbur the sausage dog has been returned to his elated owner, Paul at Termeil. Wilbur’s brother Olly is still missing though. He’s a 10 y.o beagle who ran off the property yesterday evening. Crews are out searching for him. Details @9NewsSyd @TheTodayShow #9news pic.twitter.com/FlKqSfFI2G

The “longest period” of air pollution on record for NSW is set to continue with severe bushfire conditions across the vast areas of the state. Poor air quality is now again the forecast for Sydney as a hazardous level of pollution has increased in the east and southwest of the city. Across Currowan there are still 100 fires burning, with 73 of those out of control. Media reports have also noted NSW RFS who issued fire bans for the day with hot and windy conditions which is expected to worsen.